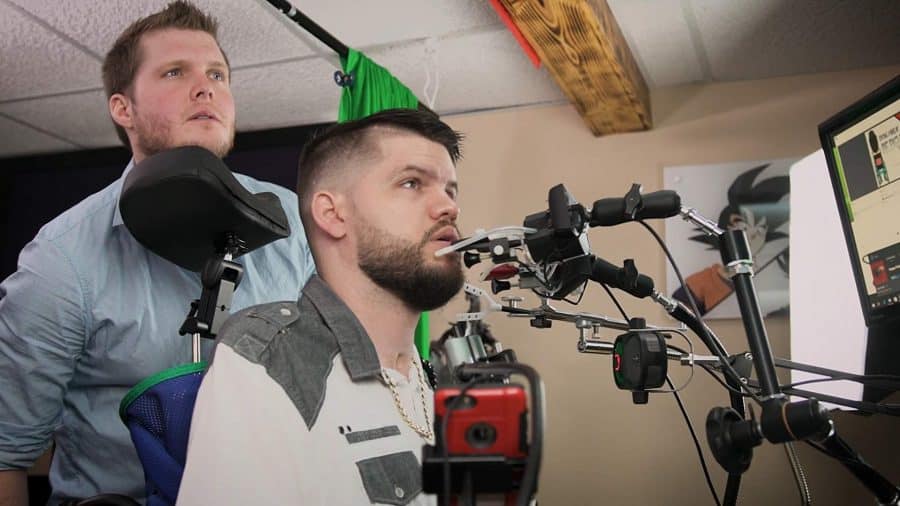 Technology has transformed the lives of people with spinal cord injuries, and that couldn’t be more true than for Rocky Stoutenburgh. As a quadriplegic paralyzed from the shoulders down, he became famous in the esports gaming world this year after signing a professional contract with Luminosity, one of the most well known professional gaming companies in the world.

He also garnered two Guinness Book of World Records for his gaming abilities, and Stoutenburgh’s professional esports career is just getting started. Who is Rocky Stoutenburgh and how did he get where he is today? A man just trying to find his way in the world, much like all of us, read on to learn his story.

Why Is He Fearless?

Growing up in a suburb of Detroit, Michigan, Stoutenburgh, 33, was an athletic young man. He was a hockey player and an avid motorbiker. Rocky was physical, although he did play video games with his friends and brother often. He also was great with his hands and loved to fix cars. Sadly, all of these things that he loved came to a halt when he was injured in 2006 at a high school graduation party. Stoutenburgh was just 19 years old.

Rocky was injured while he and friends were wrestling, and he sustained a C3 level injury that resulted in paralysis from his shoulders down. Stoutenburgh had a difficult time in the beginning as he tried to figure out his new life. Television became a huge part of his daily activities simply because it was something he could still do.

Initially Rocky had no idea that adaptive technology was available to help him play video games again after his injury. It wasn’t until 2008 when his life was changed by the news. His brother Andrew wanted to help him play video games again instead of Stoutenburgh just watching him play. After doing a quick internet search, he discovered QuadStick, a mouth-operated adaptive video game controller made for people who cannot use their arms.

It took several years for Stoutenburgh to get to the level he is at today. Various fixes and changes had to be made to his controller in order for him to improve his skills. He became so talented that around four years ago, he decided to start a Twitch live-stream channel that shares his gaming abilities with the world. Twitch lets users share a live video of themselves playing a video game and Stoutenburgh has nearly 68,000 followers.

For people who have never seen gaming with a mouth, Stoutenburgh is slowly inspiring the world. He’s even taken the online gaming name “RockyNoHands” to let others know exactly who they are competing against. He has become talented at popular games such as Fortnite, PUBG and Call of Duty. Recently, he switched to using the PC instead of a Xbox for his QuadStick controller, to make it even easier for him to use.

Stoutenburgh has become so talented using the QuadStick controller that he won two Guinness Book of World Records in 2020. His first record was for achieving the most Victory Royales in Fortnite using a QuadStick,and his second is for the most eliminations in a Fortnite battle Royales using a QuadStick.

Stoutenburgh entered the limelight as a professional gamer in 2020. After entering an online gaming contest this summer called, “So You Think You Can Stream?”, he won the contest, which helped shine a light on Stoutenburgh’s amazing abilities to the esports community. Winning the contest not only landed him a cash prize, but caught the attention of Luminosity Gaming, one of the most well known professional esports organizations on the planet.

Video gaming has become such a lucrative sport that organizations like Luminosity will sign professional gamers, and that is exactly what they did with Stoutenburgh after his win this summer in the streaming contest. When they called to offer him a contract, he said he almost couldn’t believe what he was hearing. He said,”It was kind of an out of your body moment where you’re having a phone call, but you’re not”.

If 2020 was the beginning of Stoutenburgh’s professional egaming career, we can’t wait to see where he is in the next few years. Not only does he keep getting better, so does technology and the QuadStick controller. Who knows, Stoutenburgh may end up the best in the world.

– RockyNoHands: The Gamer Who Can Beat You With His Mouth | Twitch Documentary Preview | Stream On