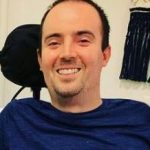 In our first episode of 2021, we speak with Ryan S. Atkins, a C3-4 quadriplegic from Cincinnati, Ohio (and Bengals fan) who was paralyzed in a car accident in 2009.  He has mastered the art of focusing on the here and now and how to balance the reality of being paralyzed and staying positive even he never walks again. Ryan has also published a book called One Step Closer where he shares this much-needed advice with the world.

During the show, Ryan also shares his memorable love story with his wife. They met when they were children and reunited after his injury. Episode run-time is 27 minutes. Listen below.