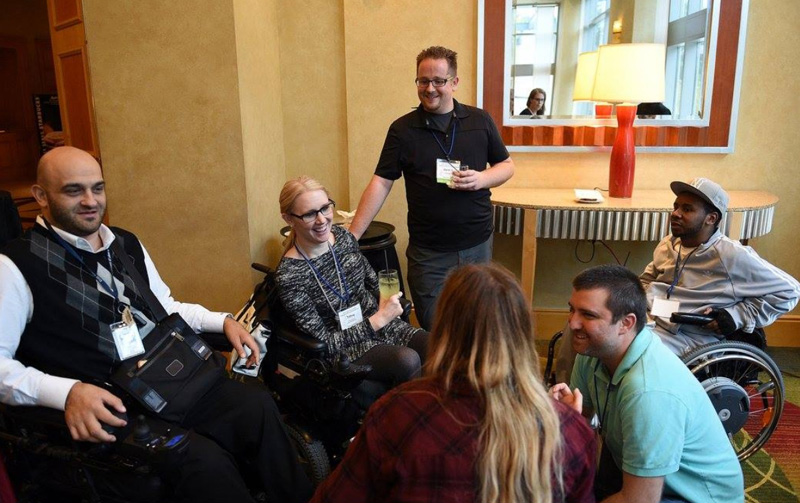 For the last 10 years a great event to further spinal cord injury (SCI) SCI research has been happening: The Working 2 Walk (W2W) Symposium – a 2-day event sponsored by the United2Fight Paralysis Association; and Spinalpedia was there! We met so many impressive advocates with paralysis and heard the latest on several promising research programs, it would’ve been impossible to leave without hope. Please enjoy our W2W 2015 review below.

W2W brings together the most passionate SCI research advocates and researchers all under one roof, and this year the event was in Bethesda, Maryland, and it was it’s 10th anniversary! Ten years ago the very first W2W Rally occurred in DC, and they held a rally that was attended by the late Dana Reeve and then Sen. Hillary Clinton. Watch a video commemorating the event through the years 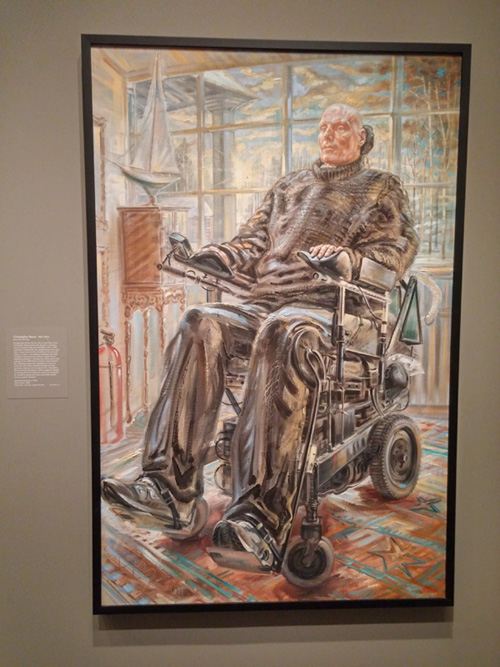 Today the event is strong than ever. And there is more reason than ever before to believe that treatments that will one day help improve chronic spinal cord injuries will happen in our lifetimes. At this year’s event, several doctors and researchers gave presentations on their trials. Here’s an overview of each presentation, with video links:

– Dr. Jan-Eric Ahlfors, Chief Scientific Officer of New World Laboratories: Dr. Ahlfors spoke on his research using bone marrow to harvest adult stem cells taken from one’s own body, and then injecting them directly into the injury site. He has conducted successful trials in humans in Russia, with paraplegic test subjects reporting increased bladder, bowel and sexual functions/sensations and some increased movement/feeling in their legs. His video clips (in Russian) were very exciting to see.

– Dr. Justin Brown, Assistant Professor and Director, Neurosurgery Peripheral Nerve Program, UC San Diego: He is doing nerve transfers in chronic quadriplegics of all levels, restoring mobility in upper extremities. He showed video clips of quads getting triceps and finger extension return because of his procedure (read more on this below).

– Gregoire Courtine, PhD, Swiss Federal Institute of Technology: Courtine and his team have been doing successful spinal cord stimulation with electrode implants in rats and monkeys, and they’ve been able to restore assisted walking ability using intense rehab in several of the animal test subjects. He also invented e-Dura, an electrode implant that bridges injury sites.

– Dr. David Brafman Assistant Professor Arizona State University: He is focused on re-engineering pluripotent human stem cells in the lab and he discussed how he’s trying to see if they can affect the cells of common neurological diseases.

– Dr. Nicholas Jeffery Professor Veterinary Neurology & Neurosurgery, Iowa State University: Dr. Jeffrey and his team are using chondroitinase and autologous olfactory mucosal cell transplants in already injured dogs, and they’re using intense rehab and gait training to get the dogs walking again, which from their video clips they’ve been able to do.

– Dr. Dalton Dietrich Scientific Director The Miami Project to Cure Paralysis: This longtime Scientific Director of The Miami Project discussed two longtime topics. 1) Cooling down an injured spinal cord to 33 degrees (in the acute phase) to change ASIA A injuries to ASIA B and 2) Their ongoing Schwann cell research, which has been a hallmark of their research program since the 1980’s.

– Dr. Edward Wirth Chief Medical Officer of Asterias Biotherapeutics: A company very much in the news, Asterias (InVivo) is doing a groundbreaking acute and chronic study with their neuro-scaffold (embedded scaffold with embryonic stem cells) device, which is now onto Phase 2. Phase 1 was discussed with the audience.

For more in-depth explanations of each presentation, read the official W2W blog here. 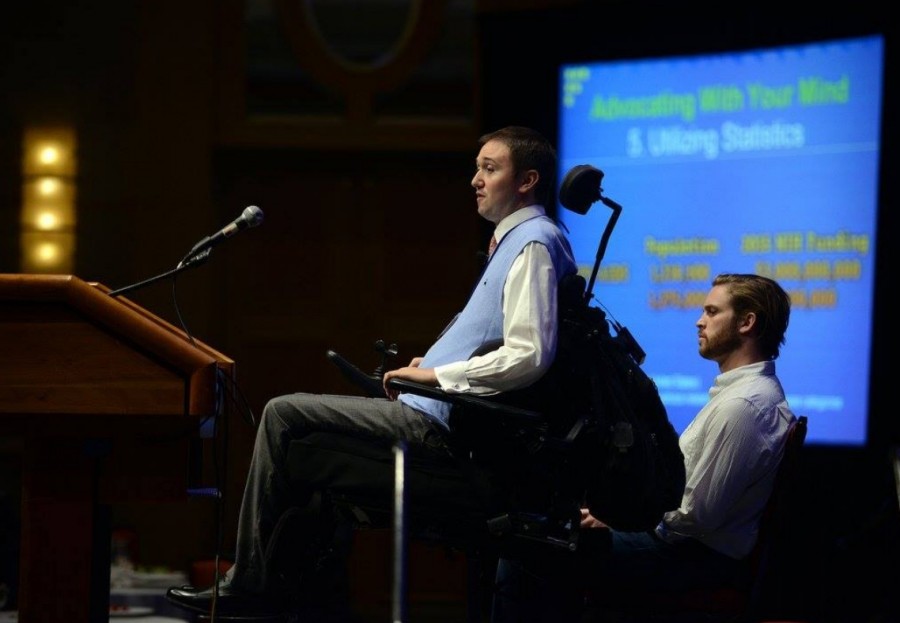 This year SPINALpedia was one of the sponsors of W2W. Our founder, Josh Basile, a quadriplegic and spinal cord injury research advocate and lawyer from Bethesda, was the keynote speaker on Sunday. His speech “Advocating with Your Body and Mind” was on the importance of keeping our bodies healthy so they’re ready for possible therapies.

He also discussed the importance of going out in public so we are seen (the more the public sees us, the more they are aware of spinal cord injuries and the need for research). His advocacy work over the last ten years since his injury has been highly admired. Watch his speech 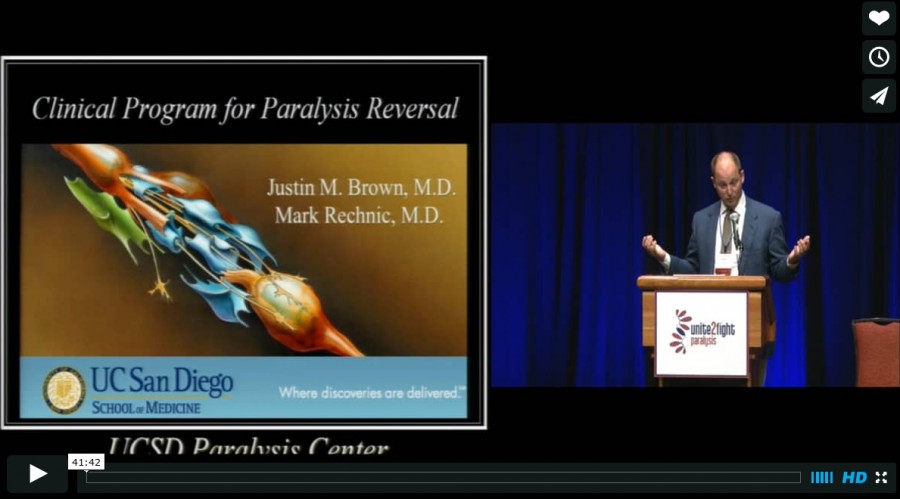 One of the most exciting presentations that received a huge applause was Dr. Justin Brown’s work; a neurosurgeon from University of California at San Diego (UCSD). He’s been doing nerve transfers (the nerves extending from the spinal cord) and has been able to return movement in the upper extremities.

He showed a video clip of a C5-6 quadriplegic post-surgery (who couldn’t raise her arm over her head before) who was able to extend her arm over her post-surgery and therapy. This is not your standard tendon transfer; it is a nerve transfer and a completely new procedure that’s slowly being practiced across the country. Only USC and the Mayo Clinic currently offer this procedure. Dr. Brown’s clinic accepts all out-of-state insurance plans, including Medicaid and Medicare. Watch his speech 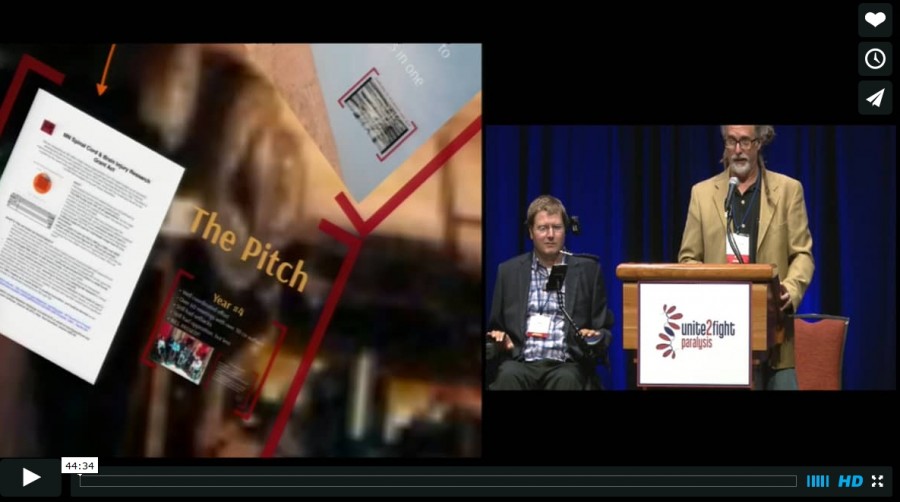 Matthew Roderick, who’s son was injured diving six years ago diving in Costa Rica, and Rob Wudlick, a C3 quadriplegic, both from Minnesota, were directly responsible for helping get $1 million in research funding from the state of Minnesota after four long years of advocacy work. They told their story, how difficult it was and most importantly they shared what they learned so others can go back to their states and try to do the same thing. Watch their presentation

Win! In our swag bags was a brand new book on spinal cord injury research, Don’t Call It a Miracle: The Movement to Cure Spinal Cord Injury by Kate Willette (her husband was injured skiing in 2001). 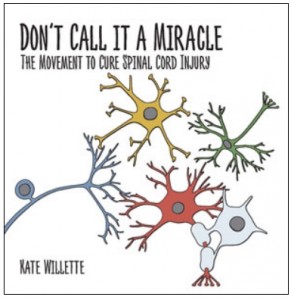 You can receive this book for free from the Christopher and Dana Reeve Paralysis Foundation too! Go here to download your copy (PDF file)

In the meantime, until the next W2W, we must stay on track. That means advocate, show the public we’re here, we want a cure, and to live our lives fully. And hope to see you you all next year at W2W 2016 in Minneapolis, Minnesota.

Want to attend W2W 2016? Bookmark their site for updates on W2W 2016 and for travel grant info

Have you attended W2W over the last 10 years?