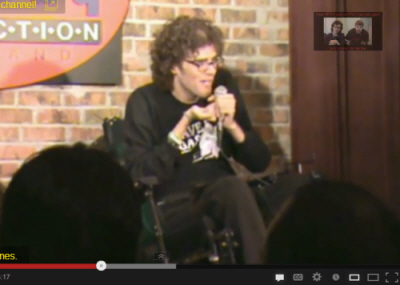 There’s an awesome thing that happens when you make fun of yourself – you draw people in. In the comedy world, they call this self-deprecating humor, and Conan O’Brien is the king of it (crazy red hair and lanky long legs never get old). Making people laugh in any shape or form is always an amazing way to connect.

That’s why more and more people with spinal cord injuries are hitting the comedy scene with wheelchair comedy (it’s wheel-y funny!).  It’s one of the most effective ways to, yes, let off a little steam, but it’s also a great way to connect with the able-bodied masses and to show them what life is really like in a wheelchair (and that it’s not all that bad).

Our first video comes from a quadriplegic comedian I just discovered, Chuck Bittner. He’s a C5 quadriplegic from New Hampshire who started doing what he calls “can’t stand up comedy” a couple of years ago. Since he’s from the East Coast, he has a biting comedic style (which I love). In this 5 minute video of one of his best routines, he talks about his website AskaCapper.com, where he answers people’s questions about what it’s like to be disabled. This guy is hysterical.

Now in his thirties, with people always freaking out whenever he gets sick, he gets annoyed of people always thinking he’s going to kick the bucket. “Kick the bucket?” he bemoans. “I can’t kick anything.” He also talks about how a stem cell cure might ruin his comedy routine one day. “Thanks President Obama. Great now I’ll have no material.” Watch his routine

The next video of wheelchair comedy comes from Damon Rozier.  Damon is a paraplegic who got into comedy after going to different clubs and not seeing any disabled comedians. He now does regular stand up at clubs near his home, and he’s known for one of the most infamous parts of this routine – giving someone in the audience a wheelchair lap dance (watch). And we have two more great videos of him – watch his classic rated R stand-up and Damon describing his craft.

And our last video comes from one of the most infamous people in wheelchair comedy to ever make a name for himself (he sadly passed away this year after a 40+ year career), the bristly Brit – Tony Gerrard. He contracted polio as a kid, and became essentially a paraplegic, but that didn’t stop this loveable Cockney-accented man from doing clubs all over the UK and becoming infamous for her wheelchair-laden jokes. He had no problem getting the good seats at football matches, as long as he doesn’t get wiped out in the process, he would always say. Watch his routine on the disabled football team vs. the blind team

Laughing is one of the most healing and cathartic things you can do. Whether you’re making people laugh or you’re on the receiving end, humor can bring people into our world and help them understand, rather than be afraid. Now all we need is a sit-down comedian and some wheel-y funny wheelchair comedy on Comedy Central. It’s gotta happen.

Do you have a favorite comedian with a SCI? Have you discovered humor to be healing?

– Damon Rozier talks about how he got into wheelchair comedy

– Damon doing his classic stand-up for a mostly AB crowd