Spinal cord injury & tattoos – why we do it 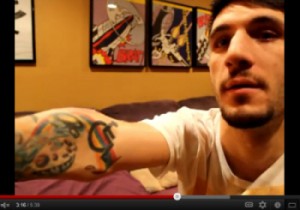 What’s more popular than iPhones, reality TV and fast food in this country? Strangely, tattoos. Like it or revile it, everyone from old ladies to young kids to yes, people with paralysis, are getting inked (with mermaid tattoos a popular choice among spinal cord injury women). Heck, my mom even has more tattoos me (believe me when I say this is very very weird).

And the reasons behind their tattoos are more powerful (and profound) than ever. Major life changes – births, deaths and rebirths, passions, spirituality, are all celebrated in tattoos. It’s no wonder people turn to the ink gun after a spinal cord injury. From tattoos inspired by Chris Reeve to a 3E Love tattoo, here are three individuals in chairs with some wicked ink.

The first video comes from Pyromaniac 4889, a heavily inked C6-7 quad who has some impressive sleeves (arm tattoos) as well as a torso tattoo of a quote from Christopher Reeve. It’s in black ink and covers a large portion of his left rib cage. The Chris Reeve quote reads, “A hero is an ordinary individual who finds the strength to persevere and endure in spite of overwhelming obstacles.” Watch him explain his tattoos, including his new ‘V for Vendetta’ tat on his elbow

The next video comes from Aaron Wood, a C3-4 quad injured in 2009. He’s created a bunch of cool videos since his spinal cord injury answering people’s questions, and in this video he explains what it feels like to get ink on paralyzed and partially paralyzed parts of the body. He talks about how his arm started to spasm when he got his arm tattoo (and had to bring his gf with to hold it down). He also talks about how he got ribbed by someone for getting tattoos, saying he’s a “wimp” because he can’t feel them. Watch his video (and rebuttal)

The last video is adorable. It shows a girl who just turned 18 getting her first tattoo on the top of her hand. And the design? A very cool symbol that’s all the rage right now in the disability community – a 3E Love symbol (the wheelchair symbol with a heart). Watch as she chats up her tattoo artist

We all get tattoos for our own reasons. There’s something mysteriously powerful about making a permanent artistic mark to your body. For me, my Celtic shamrock on the inside of my left ankle is in honor of my best friend (also paralyzed) who passed away in 2005.

I may not have felt it, but it was something permanent I did to my body that I was actually in control of for once. And while the tattoo didn’t bring Steff back, the power behind the ink really can’t be equaled.

Have you gotten ink since your spinal cord injury? Anything symbolic that honors what you went through?

– C7 quad talking about his Chris Reeve tattoo and other tattoos

– C3 quad talking about if getting his tattoos was painful