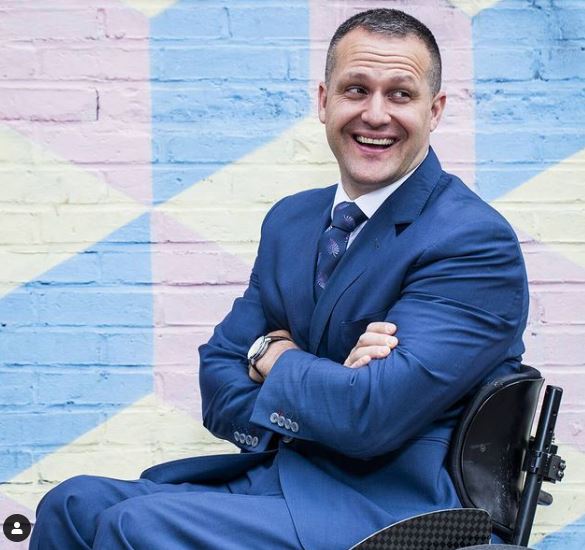 It’s not very often you see a wheelchair-user in the wine industry, and that’s exactly why Yannick Benjamin is such a standout individual. Currently head sommelier at Felida and the Atelier at the Ritz Carlton in New York City, he represents a small contingent of wheelchair-users who have made careers in the wine industry. A sommelier is the on-staff wine expert at fine restaurants.

Benjamin in fact may be the first professional sommelier in the world. And his goal of becoming a sommelier was a dream long before his spinal cord injury. To learn more about the man behind the wine glass, including how he’s made a much needed impact on the New York City disability community, read our profile on Yannick Benjamin – husband, dog dad and native New Yorker – below.

Born into a family of French Restaurateurs, as well as trips to France growing up, solidified Benjamin’s knowledge from an early age that the restaurant world was where he was destined to forge a career. However a car accident in 2003 at the age of 25 sidelined him. He became a T6 paraplegic while he was training to be one of the best sommeliers for his young age. Benjamin however was fiercely determined not to let his injury stop him.

After four months of therapy, he returned to sommelier training. Returning to the hospitality world as a wheelchair-user however posed a major problem — how could Benjamin serve tables while seated in his wheelchair? The solution was to create an adapted table for his lap that allows him to work the floor of the restaurant. What looks like a high-end wooden lap tray, the table has all of the nooks and crannies he needs to do his job sufficiently. 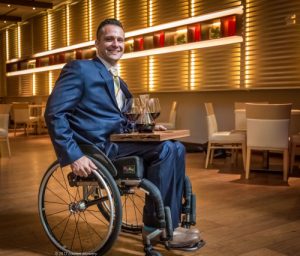 Despite being told no several times, Benjamin eventually landed his first job post-injury. One of his first jobs was head sommelier at The University Club. He’s also worked at several restaurants around New York City. He’s worked at Le Cirque, Oceana, Jean-Georges, and Atlas. He also gives lectures on wine. Benjamin’s table has inspired other wheelchair-users dreaming of sommelier careers as well, like Mirko Pastorelli in Italy, and has been recreated. He was also featured in Uncorked, a documentary series on Esquire TV about sommeliers.

Benjamin also felt inspired to reach out to the spinal cord injury community, his community, as well after his injury. When he went to physical rehabilitation, he roomed with a fellow injured individual, Alex Elegudin, whom he befriended. Together they decided to found Wheeling Forward. They’ve built the first accessible workout center in Manhattan, the organization donates wheelchairs, and they provide peer mentoring between paralyzed individuals. Benjamin has also founded Wine on Wheels, a nonprofit that holds annual fundraising events in the wine community to help people with disabilities reach their full potential.

Working as a sommelier is an amazing job, but Benjamin has his sights on even a higher prize — owning and running his own restaurant. He always dreamed of owning his own restaurant or bar since he was young boy, wanting a “Cheers”-like establishment. Before the COVID-19 pandemic, his first restaurant, Contento, was slated to open, but it had to be pushed back. Benjamin and his team, including fellow paraplegic and restaurateur George Gallego, now plan on opening sometime in 2021. Their restaurant is located in East Harlem.

When Benjamin is not busy serving up wine or working on his new restaurant, he is married to his best friend Heidi. They met in the wine industry, with Benjamin knowing almost immediately that she wants the one. He is also an avid wheelchair racer, and competes in at least one marathon a year. He’s raced in several high profile marathons including the New York, Boston and Chicago marathons.

Benjamin’s spirit and determination to live a full life is remarkable. He inspires everyone, whether paralyzed or able-bodied, to enjoy the beauty of life.