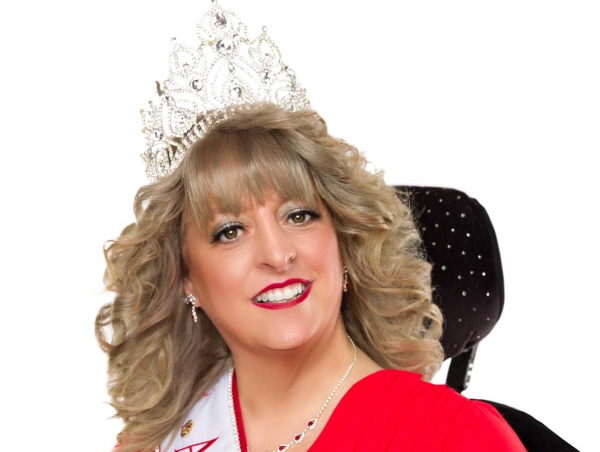 In the state of Rhode Island, you’ll find one of the fiercest advocates for accessibility in the country and an amazing survivor, Tina Guenette Pedersen. She is a 4x cancer, 4xstroke, 2xheart attack survivor and a paraplegic and the founder of RAMP (Real Access Motivates Progress), a nonprofit that helps businesses and individuals in her community become more accessible. Since becoming paralyzed, she has been on a mission to enlighten the world to the importance of accessibility.

And the best part, Pedersen gives people and businesses inexpensive fixes even if they’re not 100% ADA compliant, in an an effort to make as many spaces as accessible as possible. A passionate woman unafraid to follow a difficult path, Pedersen has become a disability advocate superstar in her state and beyond. Read on for her story.

Originally from Lincoln, Rhode Island, Pedersen was married and raised two children (a son and daughter, and she has two grandchildren) long before she became a woman with a disability, but that didn’t mean she was a stranger to health issues. Before becoming paralyzed, Pederson was diagnosed and beat both breast and bladder cancer.

After beating both cancers, Pedersen suffered a spinal stroke in 2014 during a routine surgery on her bladder. She also suffered 2 heart attacks after becoming paralyzed. After rehab and returning home, Pedersen decided to focus on things she could change, like the landscape for people with disabilities. In Providence, Rhode Island, a major city in her state, there is minimal wheelchair accessibility with many of the businesses in town having that annoying singular step making it inaccessible (only 54.5% of businesses in Rhode Island are accessible). Using her outspoken personality, Pedersen has helped bring a much needed spotlight on this issue.

When Pedersen heard about the Ms. Wheelchair America Pageant from her doctor and how it was a pageant for advocacy, she decided to run and won the title in 2018. With the title Ms. Wheelchair Rhode Island 2018, she was able to advocate on the importance of accessibility to both Congressmen in her state and the Governor.

Pedersen next went on to found a nonprofit, RAMP, to educate and advocate for accessibility and inclusion. “Ms. Wheelchair was a stepping stone my real advocacy started when I opened my nonprofit to advocate for all people not just women in wheelchairs.” And another aspect of accessibility Pedersen wants to see improve is housing. After her injury, it took her 2 1/2 years to find accessible housing, and that wasn’t until Habitat for Humanity stepped in to help build her an accessible home. Her home helps show her community what a true accessible home looks like.

Currently the Vice Chair of the Governor’s Commission on Disabilities in Rhode Island, Pedersen advocates for legislative changes to help people with disabilities in her state. She is also the host of a live podcast titled, RAMP: Real Access Motivates Progress (named after her foundation), where she interviews a wide variety of people within the disability perspective, including our founder and his partner on fathering and raising two children as a quadriplegic.

This past summer, Pedersen’s dream for a more accessible community was closer to being realized when she helped install a wheelchair accessible picnic table at Kennedy Plaza in Providence. Called “Tina’s Table,” the benches of the table are on wheels, resembling a wheelchair, and they can be moved in and out if needed. “I not only got it installed, but the entire idea and build was my brain-child,” she says. “When everyone sits down they are all in a wheelchair because the table is designed to look like power and manual chair seats.”

In 2022, Pedersen also became the first person with a physical disability to win a national title for the USA National SLICC Ambassador organization (Success Through Leadership Integrity Character and Confidence). It’s a pageant based on community service, as she completed 4,735 community service hours in the last year. Tina in fact received the Presidential Lifetime Achievement award for her community service. And she went on to win the national title, with Pedersen winning a dream mission trip to help others. “I am the first person with a disability to not only run at this level in a main stream competition but to actually win.”

Tina plans on using her national ambassador title to travel all over the country in the next year to raise awareness and accessibility. She would also like to be a model in the Raw Beauty Project. We can’t wait to see what changes she helps bring next.