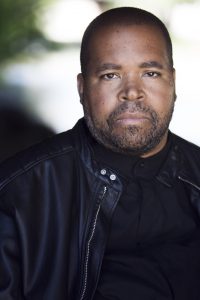 On the streets of downtown Denver, Colorado, you might spot Stewart Tucker Lundy. A resident of the downtown area and former commissioner of the city and county, Lundy, 52, is often seen with a cameraperson in tow as he zooms towards his destination in his power chair. Owner of a production company and an actor, Lundy, a C5-6 quadriplegic, is accustomed to living his life in a wheelchair, and it shows.

Injured for nearly 40 years, he knows a thing or two about resiliency. “I choose every day when I wake up to be happy. Being happy is a choice.” Life with a spinal cord injury is often that – shaping your own fate. Your life is still yours and Lundy shows how to do that in spades. Read more on how Stewart Tucker Lundy found his bliss below.

A dive into the ocean while visiting his brother in Louisiana in 1982 when was 14 year old Stewart Tucker Lundy’s life was changed forever. After his injury, Lundy was focused on returning to normal life as soon as possible. “Actually, nothing really changed. I just had to get used to my new body, and some of the limitations that it had,” he says.

After high school, Lundy entered college and began interning at a local radio station. This parlayed into working for BET, who he still works with. “Currently, I do projects here and there for them and I love it.” He also co-owns a production company with his wife. “Right now, my wife and I are rebranding our production company.” “Before it was just me, but we have decided since she does a lot of stuff that needs producing, and I’m pretty good at it, we decided to partner.”

Lundy and his wife create all kinds of media and are currently making promotional videos and trailers. When it comes to camerawork, his wife helps with that. “As far as adaptive equipment; when purchasing production equipment, it’s a little difficult. A lot of the stuff is not made for individuals with disabilities, so I have to do a lot of improvisation.”

In the 2017, Lundy played FDR in a production of Annie, some of the first on-stage acting he has ever done. “If I’m being honest, I thought it was going to be a big hug fest, so I downplayed it. My wife kept on telling me I really should audition for it, so I did.” “I read for the part of FDR, and got it. It was totally not a hug fest. I have never worked so hard in my life.”

Lundy has also done work with NASCAR and PBS. He also hopes to someday work in the film industry. As for his personal life, he’s been married to his wife Marci for eight years. “We don’t have any children however. I always tell my wife we don’t need any kids because she’s my big baby.” Lundy and his wife are huge fans of Denver and give as much as possible to the arts scene as well.