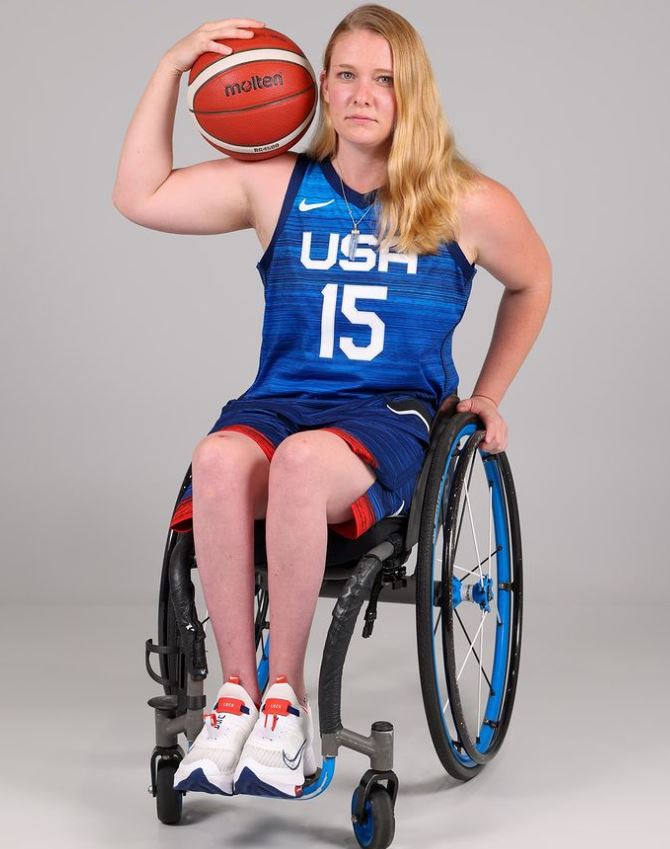 She in fact has been making headlines since her first appearance in the Paralympics, the 2012 London Paralympics, when she was the youngest person to ever be on Team USA’s women’s wheelchair basketball team. She was just 16 years old. Now 10 years later, she is a seasoned pro and is gearing up for a great Paralympic games. Read on to learn exactly how Hollermann rose to the top.

From a small town in southern Minnesota, Hollermann’s life changed at the age of 6 years old when she was in a car accident. Her mom and brothers were also in the car, and sadly she lost two of her brothers, Ethan and Shane. Hollermann bruised her spinal cord at the T10-12 level.

After rehabilitation, Hollermann did regain the ability to walk but only partially. It is difficult and she uses a wheelchair most of time. She also uses a cane when she walks. Being able to walk however did not make her feel like she didn’t belong in the adaptive sports world. On the contrary, she discovered adaptive sports as a young girl and quickly fell in love.

Adaptive swimming was the first sport she took on. It was part of her therapy after her injury. She even began to swim competitively as a child. In high school, she dabbled in several adaptive sports such as hockey, tennis, archery, cross country skiing and track and field. She didn’t find her true love however until she started playing wheelchair basketball.

Hollermann quickly improved, so much so that she became a member of the wheelchair basketball team, the Rolling Timberwolves. They won the junior championship while she was on the team in 2008, 2009 and 2010. The team also won a gold medal at the U20 World Championship in 2010. It wasn’t until 2012 however when Hollermann made the Paralympic team at just 16 years old, becoming the youngest women to make the team.

The team unfortunately did not make the podium in 2012, missing it ever so close and getting fourth place. After the 2012 London Paralympics, Hollermann transitioned to her college career and was awarded a full athletic scholarship to play at the University of Texas at Arlington on their wheelchair basketball team – the Lady Mav’s. While on this team, she killed it again, winning gold at the 2015 Parapan American Games.

She next helped University of Texas at Arlington team win their first national title in 2016. Because of that win, Hollermann was named the NWBA collegiate player of the year in 2015-2016. She made 35 points, nine rebounds and seven assists, and once again made it on Team USA for the 2016 Rio Paralympics. Still the youngest player on the team, she helped the team in 2016 win gold.

After several more national titles while a member of the Lady Mav’s, Hollermann graduated in 2019 with a degree in elementary teaching. After graduation, she was recruited to become a member of BSR Econy Gran Canaria, a professional wheelchair basketball team in Spain.

Spain has a professional wheelchair basketball league that consists of 12 teams. The league began in 1971 and the team that Hollermann is on, BRS ACE Gran Canaria, is based in Las Palmas, in town on the Canary Islands. She is a member of the men’s team in fact, and cannot wait to return to September. But first, she must conquer the Tokyo Paralympics.

And not surprisingly, being from a rural area, when she’s not on the court, Hollermann enjoys fishing and hunting. Rose is also a huge fan of the beach (especially when in Spain), as well as nature hikes, yoga, photography, traveling internationally (she’s been to Egypt) and live music.