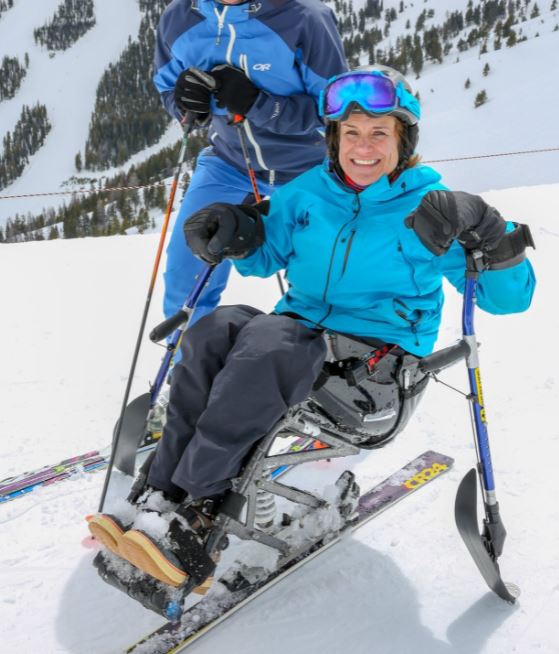 A wife, mother, Paralympic medalist, politician and former member of the Idaho House of Representatives, Muffy Davis is one of the most successful individuals in the spinal cord injury world. Highly successful in both wheelchair racing and skiing, she won 7 medals before retiring.

Also a graduate of Stanford University as well an internationally renowned motivational speaker, Davis has been living one amazing life. Read on for her story.

Growing up in Sun Valley, Idaho, Davis love to ski. She started when she was 3 years old, and by the time he was 7 she told her mother she believed God put her on Earth to be an Olympic ski racer. Early on, Muffy displayed signs of athletic greatness. By the time she was 14 years old she was named to the US development team for up-and-coming Olympians. All systems were a go for Muffy to snag the Olympic gold medal.

However at 16 years old, Muffy he broke her back while skiing on her home mountain. Devastated about the prospect of never skiing again, Davis’ mother took her to the National Center for Disabled Sports, where she got her first taste of adapted skiing.

Becoming a rock star athlete didn’t happen overnight for Davis though. When she first gave alpine skiing a try, her lack of torso control because of her spinal cord injury made her uninterested in trying any further.  It wasn’t until 1995, six years after her injury and after graduating from Stanford with a degree in biology, when she attended a ski camp hosted by a Paralympian Sarah Wills where everything changed.

While at the sit-skiing camp, she tried a new kind of mono-ski – the Yeti – that helped with her balance, and the rest was history. Within three years, she was named to the US Paralympic ski team and attended her first Paralympics in 1998 in Nagano, Japan, winning bronze in Slalom. In 2002 at the Paralympics in Salt Lake City, she won three silver medals for Super G, Downhill and Giant slalom.

Climbing mountains was another pursuit of Davis’. In 2002, she and four other disabled climbers ascended Mount Shasta in California- a peak of 14,179 feet – completely independently using a Snowpod, a hand-cranked tracked snowmobile. And 2 years after the Paralympics in Salt Lake City, Muffy’s life changed even more when she got married, marrying Jeff Burly, who she met while training (he was a manager at the adapted athletics facility). A few years later in 2009, they had their daughter Elle.

After the birth of her daughter, Davis tried hand-cycling to get back in shape and she found she was good at the sport too. In 2012, Davis went to the Paralympics in London and won three gold medals in hand-cycling – the H1-3 road race, H1-4 team relay and the H1-2 individual time trial.

After her athletic career came to an end, Davis began working in various sectors, from helping grow Disaboom, a disability site, to becoming a stewardship coordinator for Saint Luke’s Wood River Foundation.

After working as a motivational speaker, writer and consultant for several years (which she still does still this day), Davis decided to run for the House of Representatives in Idaho, a seat she served from 2018-2021. She now serves as the Blaine County Commissioner, a job she took which required her to leave her seat in the House of Representatives.

One of the causes Davis works hard for is creating affordable housing for her constituents, and she belongs to the Democratic party.