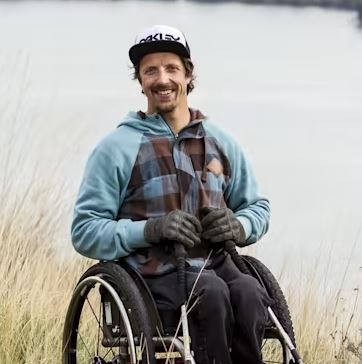 Winner of Paralympic Gold and Silver medals in para-alpine skiing, Josh Dueck, husband, father and speaker, is one of the most famous sit-skiers in the world. Landing the world’s first back flip in a sit-ski in 2012, catapulting him to fame, he has been relentless since his injury.

Also a mentor to newly injured people with spinal cord injuries and a busy motivational speaker, sharing the message of positivity and fully embracing life, read on for Josh Dueck’s send-it story.

Growing up in Kimberly, British Columbia, Josh fell in love with skiing, and by the age of 15, he was racing with his local freestyle club. He went on to become a ski coach, but sadly in 2004, he broke his back after misjudging a jump, becoming a T11 paraplegic.

Within months of his injury, Josh had honed in on how to use a mono-ski and was back on the slopes. By 2006, he began to race other para-alpine skiers and in 2010, he was chosen to represent Canada at the 2010 Vancouver Paralympics, winning Silver in men’s downhill. In 2011, he won a Gold medal in mono skier X at the Winter X Games.

Missing skiing in the back country (off groomed trails), Josh became adept at going off cliffs, which is how he ended up landing the world’s first back flip in a mono-ski in 2012. A documentary was made, The Freedom Chair, showing his life story and profiling his quest to land a back flip. The film garnered Josh a nomination for National Geographic’s 2012 Adventurer of the Year Award. But he didn’t stop there. Josh next went on to compete at the 2014 Sochi Paralympics, winning Gold in men’s combined and Silver in men’s downhill. He retired from competitive skiing that same year.

When he’s not skiing, he’s what he calls an “inspired storyteller,” aka a speaker, sharing his raw perspective with schools, groups and companies. And he likes to support organizations like the High Fives Foundation, which take kids with new spinal cord injuries camping and surfing, and he has volunteered with the Liveit Loveit Foundation, an organization in Canada, which follows the same concept.

Additionally, he enjoys mentoring those with new spinal cord injuries, and has been the Chef de Mission/Head of Inspiration for the Freedom Movement Collective since 2010.

Since retiring, Josh has stayed involved in skiing. He’s been the executive director of Freestyle BC since 2018, an organization that supports freestyle ski athletes and coaches. And Josh went on to start a family. He’s also a husband and father. In 2009, he married his longtime girlfriend, and they went on to have two beautiful children. They stay busy taking their kids skiing at his home club, Silver Star Mountain Resort, and enjoying other outdoors pursuits. He’s also a massive yoga fan and loves eating healthy, enjoying the benefits over the years since his injury