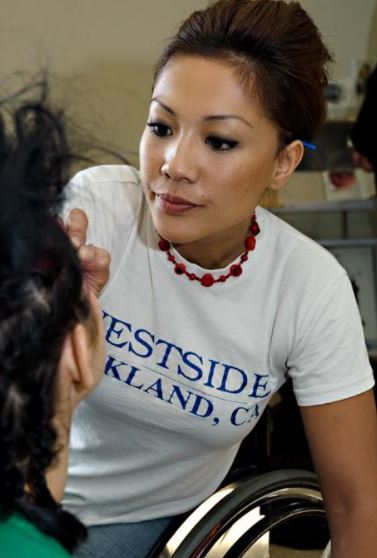 Oil painter, semi-pro pool player and makeup artist, Hydred Makabali is a multi-faceted woman. After discovering pool after her injury, she went on to become the only female semi-pro pool player with a spinal cord injury in the world. Originally from the UK, and now a longtime resident of California, read on for Hydred’s story.

A car accident in 1993 at age of 18 is how Hydred was injured, becoming a T9-12 paraplegic. In rehab, she was introduced to pool and fell in love with the game. It was both was therapeutic and something she could do with friends, and Hydred was a natural at it. Hydred began playing at local pool halls, and soon she was competing in a variety of pool tournaments, including all-disabled players tourneys, all female competitors and able-bodied tournaments that toured the country.

She was the first female who uses a wheelchair to compete in a WPBA (Women’s Professional Billiards Association) event, and at the height of her pool playing days was in a handful of pro tournaments. Hydred also began to model. Before her injury, she worked as a mainstream model for the City Model MGMT modeling agency in San Francisco for 5 years.

Post-injury, she modeled for LegaWear, Nordstrom and was the first “Colours Girl” for Colours Wheelchairs. Comfortable in the fashion industry, Hydred also tried her hand at being a freelance makeup artist for big names in the industry like Shiseido. She also loves to do special effects and prosthetics makeup, and went on to do makeup for well-known cosplayers and for ESPN Sports (doing makeup for pool players).

Hydred has slowed down her pool playing plays. Instead, armed with a fine art degree, she pursues her other creative outlet – oil painting – and has showcased her work in the San Diego-area (where she resides). She stays quiet on social media (hence no links to follow), but she is doing well. To contact Hydred about her art, email her at hmakeup@gmail.com.