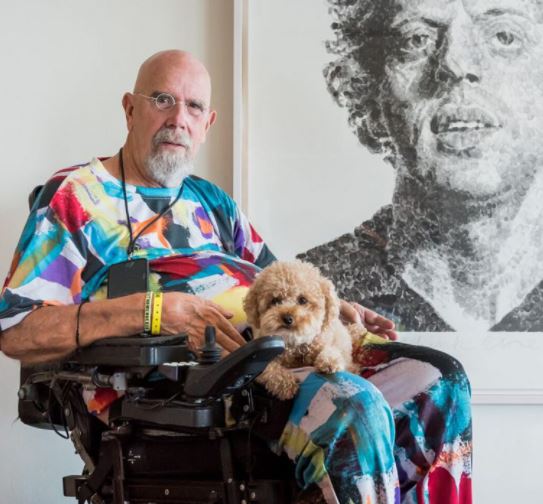 Chuck Close was an internationally renowned photorealism artist for over 50 years, becoming disabled halfway through his career. His work is in the National Portrait Gallery (of both President Clinton and President Obama), among hundreds of other museums around the globe. Read on for his story.

Why He Was Fearless

Chuck was a small town Wisconsin boy who broke free of his high school teachers low expectations. He only had Dyslexia at the time and left home to study art at Yale, then went on to study in Vienna under a Fullbright scholarship.

Chuck settled in NYC to start his art career, which got a bump in 1969 thanks to his first sale – a giant oversized portrait of a friend. These giant portraits are what he’s known for, and what he loves doing. He has “face blindness” which makes it hard to recognize faces. Creating portraits helps him remember faces.

Chuck’s work looks like a photo at first glace, but up close it’s a painting. He would work off a photo, then draws grids on a giant canvas and paints in each grid square individually to get the photorealism effect.

And he taught in his early years, enjoying a blossoming art career as well (he met his wife and had two daughters at this time). In 1988, he suffered a spinal artery collapse in 1988, leaving him a quadriplegic at the C6 level.

He was painting again using a splint to hold his brush, and an assistant to help him create the grid squares. He also began working in a custom studio with an automated canvas, which spun so he can reach all sections (a typical painting took him 14 months to complete) and used a standing wheelchair to help him paint.

Despite living 33 years paralysis, he remained quite healthy until his death at 81 years old. He had the inevitable health complications that come with age, such as having colon cancer in 2008, which he was able to beat. And in 2010, President Obama appointed him to the President’s Committee on the Arts and Humanities, an honor held for 7 years, until resigning in 2017 due to President Trump political stance on several issues.

Chuck continued to create art until his death in 2021, dying of congestive heart failure.