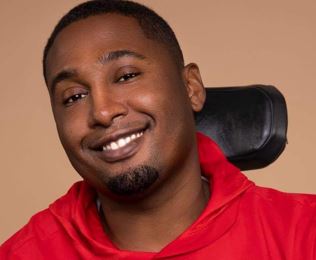 It’s not every day you decide to become an actor, but that is exactly what happened to Anton Xavier Clifford last year after a friend randomly invited him to come to acting classes. Because of this invitation from a friend, Anton has seen his life transform in some exciting ways. Since August 2020, he’s starred in a major production on the OWN network and was featured in a national commercial. And this is just beginning.

It’s been 11 years since Anton’s injury and he has his eyes on an even bigger prize – making acting his his career. Preparing for a future in the entertainment business however takes a lot of hard work and patience. He has some big dreams he would like to see come to pass. From being paralyzed in high school to his present-day self, Anton has come a long way. Read on to discover his story.

When Anton was 16 years old with his family vacationing in Jamaica, his entire life changed. Injured in a car accident while a passenger, becoming a C4-5 quadriplegic, Anton was transported to Miami, Florida for treatment. After finishing his rehabilitation at the Shepherd Center near his home in Atlanta, Georgia, Anton was sent home.

“Transition to home from rehab was exciting, but as I look back, I was very nervous. There was so much uncertainty of what the future would be.” Anton credits his family and friends for being there for him during this time. Fortunately, he went back to high school and thrived. “I was kind of popular. I was even crowned homecoming king.” “Students treated me with respect/curiosity but overall, my friends were around; especially in the beginning.”

Anton was also assigned a helper aka a “para pro” who helped him succeed in high school. “To this day I keep in touch with hi, as he was my rock and anchor every day back then.” After high school, Anton tried the college route. “I wanted to go to college to study communications/criminal justice and really tried but that journey was very difficult with health issues, so I started to try and reinvent myself.”

He first tried to stay busy journaling, writing his thoughts down and reading as much as possible. But he also thought about studying to become a lawyer, but he was not interested in taking online classes. It wasn’t until several years after graduating from college that Anton thought about doing acting as a career, after a friend’s suggestion.

“I got involved in acting through a friend who was in the field. She encouraged me to join her in some classes at the school she was attending. I denied her offer for a while then I finally audited a class and then the rest was history,” he says. Anton enrolled in acting classes shortly thereafter and is still honing in on his craft till this day.

After being in acting school for around one year, Anton started submitting headshots to land an agent, and signed with his first agent in August 2020. Thanks to his agent, he received his first role within months, and it was a big one at that – a part on “Queen Sugar,” a TV series on Oprah Winfrey’s network OWN. Anton played a man paralyzed by police brutality.

“The role was relevant to current events and very relatable. I was very happy to have my first role be on a national network with such a popular show and I was with the lead actor. This was a dream come true.” He auditioned for this role during the COVID-19 pandemic by sending in his headshots and auditioning over Zoom.

Anton’s first taste of the entertainment industry has whetted his appetite for more. “Being on-set so far has been an amazing experience,” he says. “I can have a caregiver close by and accommodations are made so I can get around on set with my wheelchair. I now see a future for myself as I get do something, I am truly passionate about.”

Anton’s agent was also able to help him get a role in a commercial highlighting the inaccessibility of the Internet and how it can be remedied using accessiBe, a new accessible web-browser. “After the casting director selected me for the audition, I was fortunate to book the role.” Check out the commercial here

And Anton has plenty of plans for future roles he hopes to book. “I hope I can book roles such as lawyers, military, or FBI /CSI agents and potentially some comedy,” he adds. “And one of my loftier goals is to land a role doing voice-over work for Disney. I have been a huge Disney fan since the age of 3.”

Anton is excited about the direction disability representation is going. “I see more and more individuals with disabilities being used to do commercials, movies, and TV series.” “The environment is much better today than it was in the past. Don’t be surprised to see me one day as a Marvel superhero. I want everyone to dream big. Acting gives me joy and a sense of accomplishment that nothing else does.”