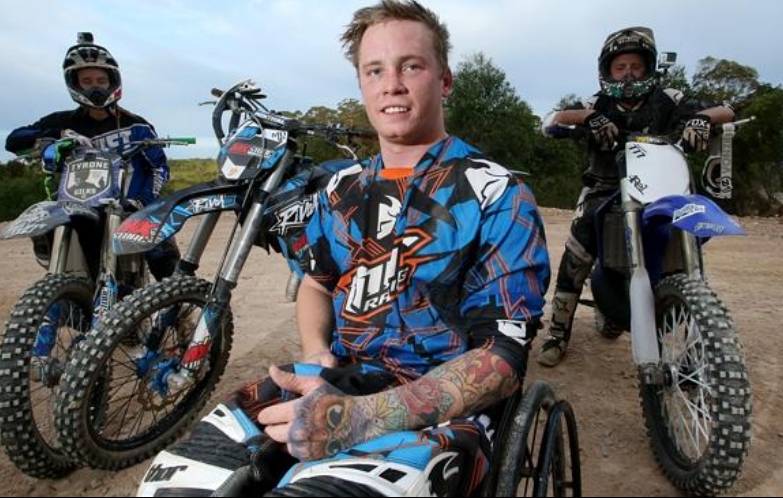 “It’s not too bad, it’s just different.” This is how Andy Hensel from Port Pirie, Australia, one of the world’s most accomplished paraplegic motocross racers, now describes what riding is like. A former top 20 freestyle motocross racer, he’s now making records as a paraplegic, discovering the far reaches of what is still possible as a paralyzed motocross racer.

Injured only a few years ago, this 20-something had already had a difficult past. He went to jail for drug charges for 1 year in his late teens. But after his injury, he knew he had to stay on-track. And within a year, he had already figured out how to return to motocross.

Some might think he’s crazy for returning, but that’s why he’s a SCI Superstar in our book. Andy refuses to let his injury win. Read on for his excellent story.

As a boy, Andy fell in love with anything on wheels. Bicycles at Christmas and birthdays quickly got him hooked. Andy first started racing Go-Karts, but by his teens he switched to motocross – FMX – and within eight months of switching over, he was already in the top 20 motocross racers in Australia. He was known for doing his jumps with his flexible legs that’d fly and pose in the air behind him.

But in 2012, while racing at the Australian Underground Freestyle MX, he crashed going 75 mph. He knew the moment he took off he was going to crash, and it was all caught on video, recording the very moment his back broke (he’s now classified as a T7 incomplete paraplegic).

Andy flipped over his handlebars when he landed, his body landing crooked and breaking his back. Since that day, his transition into life as a paraplegic is a work in progress. At the beginning, he did not take the news well, hating doctors were so sure he’d would never walk again. “Tell me I broke my back,” he says, “but don’t tell me I’m not going to walk again.”

Since his injury, he’s been fighting to get as much return as possible, even going to Project Walk in the United States. While there, he was able to walk using a walker. But all the while, he knew he couldn’t stay away from motocross for long. And within 7 months, he was back on the track on a modified 450 motorbike.

But just getting on a bike again was not enough. Andy wanted to prove that even though he was paralyzed, he was more than capable of being as badass as he was before. And in 2014, Andy made history landing the first back-flip on a motorbike by a paraplegic, landing safely in a foam pit (watch). His ultimate goal now that he’s paralyzed – join the Nitro Circus and do crazy stunts for pay (he was likely inspired by our SCI Superstar and Nitro Circus member, Aaron Fotheringham).

Motocross may be different for Andy now that he’s paralyzed, but he’s determined to focus on what he can still do instead of dwelling on a moment he can never take back. This is the attitude all people with spinal cord injuries need to take on to survive. Andy has – that lucky dog – just figured it out a lot sooner than the rest of us.

Would you return to the track as a paraplegic?