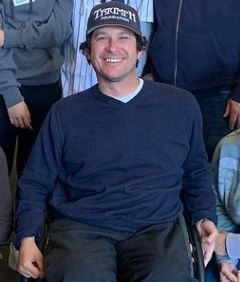 If you live in Southern California, chances are you’ve heard of the Triumph Foundation, an organization providing SCI support groups, care baskets, adaptive sports and more to people with paralysis. But do you know the man behind this foundation that’s been changing the lives of people with spinal cord injuries since 2008?

Before his injury, Andrew lived a very active life. As a young man, he loved all kinds of sports and after graduating from high school, he decided to attend California State university, Channel Islands to study business. It was here where he met his future wife Kristen. After graduating together with business degrees, they were excited about their future life together.

Six months after graduating however, life had different plans. At a family gathering for Thanksgiving at Lake Arrowhead, Andrew have a freak accident while snowboarding, breaking his C4-6 vertebrae. Andrew was quickly brought to Northridge Hospital, where he was given basic physical therapy. He however wanted more, and was able to find alternative physical therapy after being discharged.

Soon, after finding a trainer, he was seeing recovery gains that doctors had told him was previously not possible. Re-diagnosed an incomplete quadriplegic, Andrew can now walk several feet in the water. While his ultimate goal is to walk again, he was been able to relearn nearly everything and is fully independent. In 2008, 4 years after his injury, Andrew wanted more out of his professional life as well. He wanted a career doing something that meant more than a business endeavor.

Andrew decided to found a nonprofit to help people with spinal cord injuries in Southern California, calling it the Triumph Foundation. He wanted to give people the information he wished someone would have given him when he was still an inpatient. The mission of his foundation is to inspire people with spinal cord injuries to triumph over their disability and to push themselves to get better every day by moving forward.

One of the most helpful things the Triumph Foundation provides are their care baskets, which they deliver to people with new spinal cord injuries in hospitals throughout Southern California. Each basket contains priceless information needed after a spinal cord injury, such as how to acquire government assistance, nonprofits that exist that can also help, how to get assistance for an adaptive van, how to get house modification assistance, and so much more. They also contain fun things like sweets, snacks, gift cards, t-shirts and novelty items.

Each basket is delivered to their hospital room by Andrew or someone from the foundation. Their goal is to raise the spirits of those with injuries and to help them ease into the transition of their new life. They also provide exciting adaptive recreation opportunities, such as their annual adaptive sports festival each Spring, SCI peer mentoring and SCI support groups.

Andrew and Kristin were married in 2007, a year before the Triumph Foundation was founded. And in 2010, their daughter Betty Jayne was born. She is now the “Chief Happiness Officer” of the foundation. A close knit family, Andrew and his family love outdoor adventures in California, like camping in their Sprinter Van (when they’re not busy going to dance competitions for Betty).

And Andrew has become one of the most well known people in the spinal cord injury community. At the Abilities Expo in Southern California each year, their booth is always one of the busiest on the floor. Enough cannot be said about the importance of providing a social community for people after a life changing event, and that is exactly what the Triumph Foundation does for people with paralysis.

And that is not all. Andrew is also a huge fan of quad rugby. His foundation regularly puts on quad rugby clinics to teach people the basics to those with and without disabilities, such as at Air Force bases to spread awareness of those with disabilities (and their abilities). The Triumph Foundation has a large team of ambassadors of people they’ve helped previously who volunteer to demonstrate sports like quad rugby and other adaptive sports in the community.

When there are countless lives that have been impacted by the work you’ve done, you know you’re on the right track. Andrew’s vision to help other with paralysis has manifested into a reality that is truly astounding and the entire SCI community cannot thank him enough.

— Visit the official site of the Triumph Foundation