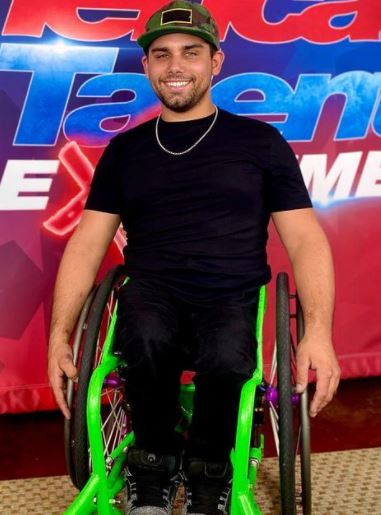 “Just when you thought sitting was safe” is a quote from Aaron Fotheringham. A WCMX legend who’s toured with Nitro Circus, an extreme sports tour, for over 10 years, he’s the first person to land a wheelchair back flip. Also known for his motivational speaking, doing demonstrations of his tricks at events and schools, this longtime Las Vegas resident is someone you will never forget. Read on for his story.

Aaron was born with Spina Bifida, but was never one to just sit. After he was adopted as a baby (his family adopted 7 kids), his siblings is the reason he’s the extreme adapted athlete he is today. One of his brothers was into skateboarding, and Aaron would always go along and watch. After watching everyone have all the fun, at 8 years old Aaron decided it was time to stop watching and gave the quarter-pipe a taste of his wheels. He got really good, and quickly.

Once Aaron became a teenager, he entered able-bodied BMX competitions, and he was always the only adaptive athlete. In 2005, he won the Vegas AmJam BMX Finals, and then several more BMX freestyle competitions in the following years. All of that was all build-up for a wheelchair trick Aaron had been silently practicing – the world’s first wheelchair back flip.

Aaron has been touring with Nitro Circus for over a decade and has been all over the world, from Europe and Australia and New Zealand to South America and across the US. His fame notched even higher in 2022 when he was a contestant on America’s Got Talent Extreme, showing America his amazing mega-ramp jump, and landing it his second try.

And Aaron met the love of his life along his travels, getting married in 2018 to Charlee Wilson. The two live happily together in Las Vegas with their dogs, and we can’t wait to see what Aaron does to next. We see Hollywood/action movies in his future. A perfect fit.