Guest Post: How Can I Protect My Wife If I Can’t Even Hold Her Hand? by Ryan Atkins

Editor’s Note: This is a guest post from Ryan Atkins (C3/C4 SCI, 2009), a speaker and writer sharing hope and inspiration for eternally minded living at www.Flatonmyback.com. Ryan is active on social media and would love to connect on Instagram (Instagram.com/RyansAtkins). 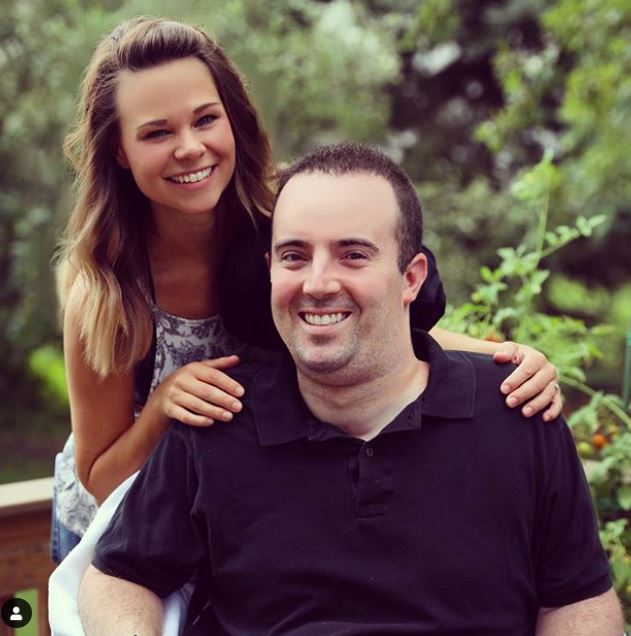 Chills went down my spine as I stared at the ceiling in the pitch black. It was the middle of the night and I heard the rustling near our bedroom door. I desperately wanted to leap up and investigate, but I remained motionless. All I could do was listen intently with countless thoughts racing through my mind.

Questions surfaced in my mind as I attempted to remain calm, cool, and collected. Had someone broken in? Should I wake up my wife Stephanie? Were we in danger? How could I protect her without even being able to do anything more than glance in the direction of the noise?

Moments later my concern was eradicated as Stephanie emerged with a glass of water in hand. Apparently what I saw in my peripheral on her side of the bed was just a pillow. I exhaled and laughed, but I couldn’t shake the helplessness I had felt as my insecurity in my own masculinity skyrocketed.

Feelings of helplessness accompanying situations like this have often consumed my mind over the past decade, in the aftermath of becoming paralyzed below my shoulders.

As a 21-year-old in 2009, I was on top of the world. I was enjoying a full ride college scholarship with my sights set on future business success. Everything was going according to plan until I lost control of my vehicle on the highway. After flipping multiple times across the median, I laid unconscious in a crushed car unaware I had broken my neck.

After getting airlifted to the hospital and spending a few weeks in the ICU, I spent the next four months in rehabilitation. I pushed myself to the limits in order to regain the ability to breathe independently of a ventilator and eat without a feeding tube. Following this, a move back to my parents’ home was necessary. I returned paralyzed below the shoulders with no way to fully grasp the battle that lay ahead in the coming days.

Beyond the physical pain and heavily restricted independence and freedoms, a mental war was waged deep within my mind as the doubts persisted.

Am I still a man? Does my life still have purpose? Can I still be considered masculine while being 100% reliant on others for my most basic needs? What about dating? Even if the right girl did come along (which she eventually did), how could I fulfill my role as a boyfriend or husband without even being able to hold her hand?

The biggest area that I have found myself consistently wrestling with in terms of my masculinity has been my inability to physically protect anyone- let alone defend myself.

How am I possibly able to do this with legs that cannot run, jump, or kick?

How can I legitimately protect anyone with arms that cannot hold, push, or punch?

What am I supposed to do in public in the case of an imminent threat to my wife?

I had to swallow the reality that the only one that would be doing any protecting was the person I was with. “I am a 30-year-old male, and my wife is my bodyguard.” That sure sounds manly.

For the longest time I bought into the illusion that I am simply unable to be a protector because of my physical limitations. However, as I was questioning my qualifications, the obvious reality set in that while I can’t physically protect others around me, a situation has never actually come up in which I have had to. The more I thought about it, I realized that situation never arose before I got hurt either.

In terms of the protection of others, I’m realizing a musclebound physique is not a prerequisite for manhood.

Instead, I can look to what I am still very capable of and realize there’s plenty more for me to be proficient at than I was allowing myself to believe.

I can stand up for truth.

I can speak my mind.

I can communicate my thoughts on my blog www.FlatOnMyBack.com to bring hope in the midst of difficult circumstances.

None of that involves physical confrontation. And that’s okay.

Billy Sunday, one of the first popular baseball players of the 1800s, knew his physical prowess would not be the definitive metric for his life. He is quoted as saying, “You can’t measure manhood with a tape line around the biceps.”

Reflecting on this is an encouraging reminder and confidence booster that my manhood is not defined by whether or not I can be an imposing physical presence, ready to fight at a moment’s notice.

I can’t hold the door open, but I can be intentional about encouraging my wife.

I can’t bench press 300 pounds anymore (I guess I could never do that), but I can be a listening ear.

I can’t plant my fist in a predator’s jugular, but I can be a safe place for Stephanie to talk, feel cared for, and feel protected in a way that a physical presence alone never could.

No matter the limitations, I can still pray with and for my wife.

Life may not be playing out exactly how I had envisioned it, but I want to keep striving to be the best man I can. The past decade has caused me to pause and reconsider where my identity as a man is coming from. Through this I am reminded that as long as I’m being intentional about areas I am capable in, I can be confident that I have what it takes just the way I am.

What is your biggest insecurity in living with a spinal cord injury?

Want to take your first step to a healthier perspective?

I am offering a free resource to all of Spinalpedia’s readers called “7 Keys to Living with Passion and Purpose,” and it will help you . . .

– Become a greater blessing to your community

– Ask the right questions to live a fulfilling life

– Use your time more effectively

– Live FROM approval rather than FOR approval

Click here, enter your email address, and I will send you this guide prepared especially for you!

In addition, because I have found reading to be an incredibly effective way to shape my perspective, I’ll send you a list of favorite books!