Guest Post: Quad In The Kitchen by Gareth Herridge 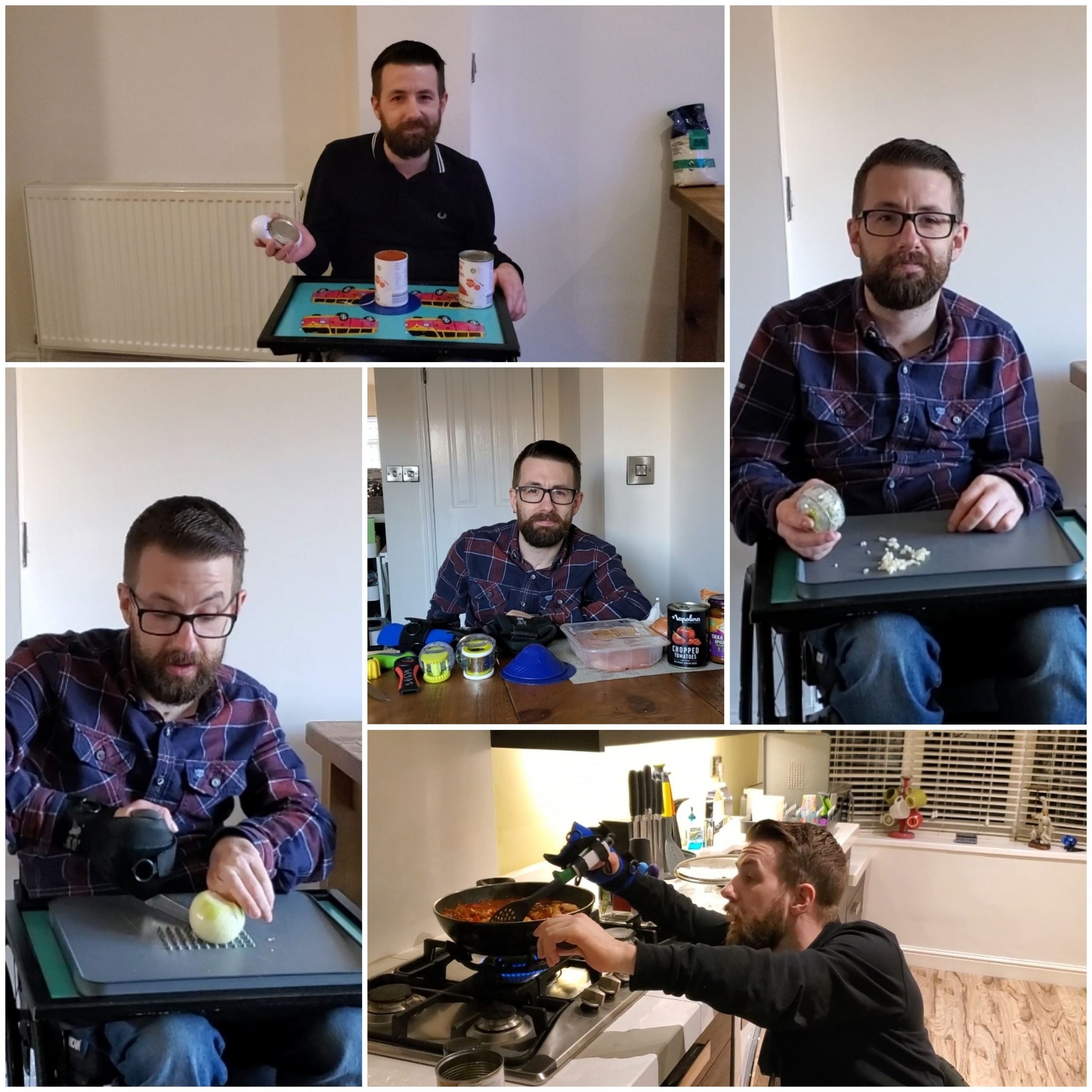 (Gareth Herridge is a C6 from the United Kingdom injured for almost 10 years. He is the lead author/blogger for the awesome Active Hands gripping aid. Read his work here)

Cooking has never been my strongest skill. Even before my injury in 2005, my “homemade meals” often didn’t stretch much beyond cheese on toast or my patented pasta avec sauce! After a road traffic accident resulted in me becoming a C6 quadriplegic with limited arm and finger function, I took it for granted that my culinary abilities would never graduate beyond these.

However, one of the few benefits of the last 12 months has been that I’ve had the chance to spend a lot more time in the kitchen. Using this time to test out methods of accomplishing things with a combination of kitchen aids and learned techniques has made me realise that, even with a high level disability, I am still able to create full meals from scratch, far surpassing what I had previously believed myself to be capable of!

• Chopping/slicing – Whether it’s meat, fruit, veg or anything else, cutting ingredients into manageable chunks is one of the most essential parts of any recipe. Being unable to grip the knife properly however can often make this a near impossible task (try cutting through an uncooked sweet potato for proof)! The solution I found involves combining a right angled knife with a chopping board that has a spiked area on it. Having a handle that sticks upwards rather than outwards greatly reduces the chance of the knife slipping out of your hand, and by placing the item you want to slice on spikes you are ensuring that it remains in place as you chop. For an extra firm grip, I hold the knife with a General Purpose Gripping Aid which guarantees it stays in my hand no matter how much pressure I’m putting on it.

• Peeling – Before the chopping often comes the peeling, another task that can prove to be way more hassle than it should be when you lack grip. A simple aid like the Palm Peeler solved this problem for me. With a finger loop that keeps it in place, the peeler sits in my palm and allows me to peel fruit and veg just by running my hand over them.

• Opening tins/cans – Long gone are the days of me being able to operate a manual tin opener. Thankfully there are one touch automatic openers available which you place on top of the tin, press a button and then sit back and watch it spin around, cutting the top off in a matter of seconds! And for ring-pull tins/cans I use a 5-in-1 opener that is also great at opening soft drink bottles, beer bottles and jars; trust me, your teeth will thank you!

• Grating – Post-injury grating sits on a very fine line for me. If I’m grating an item of adequate but not too large a size then I can semi-manage by using a combination of tenodesis grip and a horizontal grater. However anything too small that I’ll struggle to grip and I’m more likely to end up grating my fingers! That’s why last year I began using something called a GraterZoom. You feed a small amount of whatever requires grating (cheese, chocolate, carrot, ginger etc) into the top, then roll the device forwards to grate it or backwards to slice it. I’ve also found myself using garlic regularly in my cooking and, as I’m unable to operate a garlic press, I use my GarlicZoom which allows me to chop up several cloves in a matter of seconds.

• Pans & utensils – From boiling rice/potatoes to simmering stews/curries, pans are a vital part of most meal prep. However, boiling liquids + limited grip can also make them one of the riskiest. To lessen the risk I wrap an anti-slip strip around all my pan handles; the grippy material enabling my hand to hold onto them much more firmly than without. I would also recommend pans that have lids with handles rather than knobs, as well as built-in strainers, as these additions make it much easier to remove the lids and drain the water. For stirring ingredients, flipping over meats, or spooning food out of the pan once cooked, I incorporate a Small Item Gripping Aid. By attaching a utensil to the velcro pad and then fixing it to the gripping aid glove at whatever angle required, I’ve found myself able to use the utensil however I wish without worrying about it slipping out of my hand and more than likely onto me!

• Best of the rest – A plastic kettle gets far less hot to the touch than a metal one, greatly reducing the chance of burning yourself on it when picking it up. Electronic scales that allow you to weigh items directly in the pan/bowl are a great time saver and way more convenient than conventional scales. If you can’t reach to turn on the extractor fan above your hob then a walking stick makes an excellent extension for button pushing – took years of steamy surroundings for this one to dawn on me!

Those are just a handful of methods I’ve discovered that have allowed me to really expand my culinary palette over the last 12 months; cooking up a variety of curries, stews, fish dishes and more. I’m not saying they’ve all been sumptuous delights worthy of Master Chef, but they’ve all, at the very least, been edible!

All of the aids mentioned, along with plenty of others I didn’t, are available on the Active Hands store so take a look for yourself and see what you’re capable of!