Guest Post: How The Gift Of Tendon Transfers Changed My Life by Jenny Smith 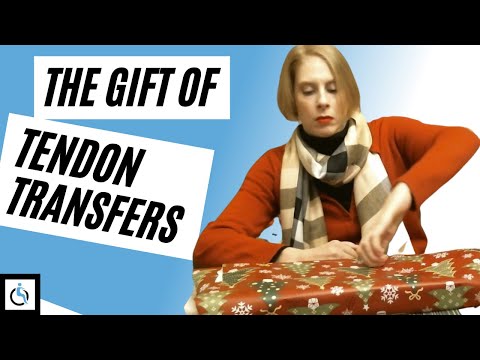 Paralyzed at the age of 16, Jenny Smith is a writer, speaker and disability advocate. She’s also a fan of cooking, rowing on the Ohio River, wheelchair tennis and Quad Rugby. Learn more about Jenny at jennysmithrollson.com

It had been 9 years since my spinal cord injury. I had just graduated with my master’s degree in counseling psychology. Although I was uncertain of my future career, I was sure of one thing: I was taking a year off to have a series of surgeries called tendon transfers.

As a C6-7 complete quad, I had no hand function and no triceps on my right side. I needed assistance with the most basic activities.

One night my mom met Sharon Shaw in a Bible study. When she came home that night my mom said, “Sharon thinks you should talk to her husband about tendon transfers.”

I immediately knew it was time.

I had heard about the surgery shortly after my injury. But I wasn’t interested at the time. In all honesty, I didn’t want the scars that would be visible as a result of each surgery. And more importantly, I was holding out hope that I would regain some hand function. But by this time, it was clear I had regained as much function as I was going to.

What Are Tendon Transfers?

Tendon transfers move the tendon of a functioning muscle and surgically places it in a position that allows the transferred muscle to perform a new action in the hand or arm. The tendon transfers a person can have is dependent on one’s level of injury.

Dr. John Shaw is a physical medicine and rehabilitation doctor, as well as an orthopedic surgeon. He is one of a small number of surgeons who performs this surgery in the United States. Every few years he meets with other surgeons from around the globe to discuss this delicate and complicated surgery.

The tendon transfers I had required four surgeries. I decided to take the entire year off from work and school since I would be severely limited in what I was capable of doing – including driving.

The first tendon transfer was on my right arm. The posterior deltoid muscle was transferred so I could activate it and use it as a tricep. I’d never had any function in my right tricep, which enables the raising of the arm above the head and extending the arm; dressing and transferring are just two of the many ways a tricep is used every day.

After I woke up from surgery, my right arm was in a cast from the top of my shoulder to the tips of my fingers. For six weeks I needed help with everything. The cast was literally tied to my power chair to keep the weight of it from pulling me over. (I think Dr. Shaw made the cast heavy on purpose, knowing I’d be tempted to “cheat” if I could move it!)

I had three more surgeries, each followed by four weeks in a cast and several weeks of occupational therapy. Two of the surgeries gave me a pinch in both thumbs by transferring the brachioradialis muscle. The final surgery gave me the ability to grip with my left hand by using the middle wrist muscle.

Because of the surgeries I can pick up a book, grasp a water bottle with my left hand, and securely hold silverware, makeup brushes and a toothbrush without using adaptive devices.

Transferring independently in and out of bed, dressing, fastening my bra, and grabbing a pan and spatula to cook dinner are just a few of the ways tendon transfers gave me independence.

Each year at Christmas, I remember the gift of independence that Dr. Shaw gave me by wrapping Christmas presents.

As for the scars I was so worried about? They are barely visible thanks to Dr. Shaw’s attentiveness to my concerns.

If you’d like to see my tendon transfers in action, watch the following videos: