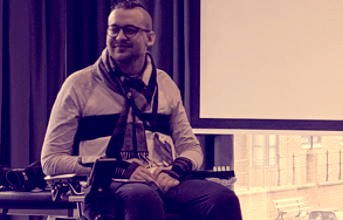 Every story of spinal cord injury is a story about loss. Nobody, regardless of the severity of the damage, completely escapes the aftermath unscathed. After all, there’s a reason why that bundle of nerves is covered in segment after segment of thick bone and dense ligaments; we naturally have evolved to protect the most essential parts of us as best we can. But for some of us that protection was not enough; whether it’s from a bomb in Iraq, a blood clot in the wrong place or an infection you could never have anticipated, you have lost something that you can’t get back.

Loss can be a word people do not like to use. But admitting loss does not make you a loser. We are all testament to that; as courage is to continue in spite of fear, not in the absence of it, similarly, resilience and determination are to continue despite losing something. I spent several years after my injury trying to fill in and pave over the things in my life and in myself that I had lost, to replace them as if they had never been there in the first place, and I never managed it.

I was injured in 2018 in a head-to-head collision with a car while cycling to work. I was 23 years old and a doctor working in a city in the Midlands of the UK. I was admitted to the hospital I worked at with a C4/5 fracture dislocation and what would eventually be diagnosed as a complete spinal cord injury. My girlfriend was on call at the time at that same hospital. My friends and family waited while I had emergency surgery, and waited another 10 days during my medically induced coma. After a gruelling 15 months I would return home. If you’ve been around the spinal cord injury community for any amount of time it’s not by any means a unique story.

In a freak incident on a quiet road on a February evening I lost not only motor control of most of my body, but my career and most importantly my sense of self. It’s a feeling most injured people will know; maybe suddenly, or maybe later when you first return home, you realise you don’t know who you are anymore.
The roles you have developed for yourself throughout your life; a working dad who can fix everything, an independent woman with a strong career, a kid who excels at sports: it’s all in jeopardy now. Or worse, it’s already gone. And you’re not sure if it’s coming back.

My friend Ife who writes the blog My Life In A Chair, wrote about this with a beautiful concept of retiring certain aspects of his life after injury. He describes how some things in his life and not possible for him anymore. Typical nights out? Retired. Popping to the shops? Retired. I think he encapsulates letting go in the healthiest way. But retiring is not always a happy process, especially if you’re not ready. Watch

I lost a potential life that I had been working towards since my mid-teens. Medicine especially is a career that requires such personal investment and encompasses such a large part of how you live that inevitably being a doctor becomes a huge part of who you are. I had to retire that. I had to say goodbye to my love of athletics and the joy of human movement, the joys of scuba diving, spontaneous travel and so many other things.

I know we all love the stories of triumph over adversity, the stories of huge progress despite dire initial prognosis, the stories of winners going on to keep winning, the stories of walking again. I’m not saying that we shouldn’t tell those stories, in fact I think it’s essential that we do; they not only give hope but show that there is a life after injury. But it’s so important for us to remember that underneath each one of those stories, in each one of those people’s lives, they have lost something. Not only is that not something to be ashamed of, it’s the heart of the reason why these things are things we celebrate. Some people walk after injury. Some people make incredible recoveries. Some people don’t.

The severity of our injuries doesn’t say anything about the content of our character, but even more importantly it doesn’t have to fatally determine the quality of our lives. But here’s the thing that no one ever told me: grief is really hard work. It’s graft. There are most definitely adverse parts of life that do not resolve on their own, and I think that’s a lesson life teaches us all at some point. You don’t emerge, butterfly-like, from a cocoon of misery at precisely 18 months post injury completely readjusted to a new life; anyone who has suffered knows that’s a ridiculous idea. Not only that, but it’s a little bit insulting. Why? Because it devalues all that work you have had to do to reshape yourself.

Without that sustained mental fortitude-of course bolstered by the support of family and friends- drink and drugs can become the coping mechanisms of choice, because none of this is easy. Grief is not just a process you wait out until it’s over; it’s a long-term and time-consuming project with no roadmap and lots of pitfalls. I’m not saying I have it all worked out; after all, I’m just some guy on the Internet. I don’t think anybody reaches a point where they are completely untouched by their past. Some days life can be brutal, some days get too much and I want to quit and some days I just wish this had all happened to somebody else.

Sometimes I think about how I’m never going to walk down the aisle or teach my future children to ride a bike and I struggle, and if I had the option to go back and undo my injury I would do it in a heartbeat. But all of that doesn’t mean I can’t press forward and forge a new life with new meaning; if anything, coming to terms with that loss has been integral to me growing as a person.
This idea is nuanced, but bear with me because I think it’s really important. The following two statements can both be true; my quality of life has been reduced by my spinal cord injury, and my quality of life is good- great, even. This is pivotal because it defines how we talk about and support people with spinal cord injuries.

Too often we shy away from the first statement and rush towards the second, and it’s understandable; who wouldn’t want to focus on the positive and push past the negative? But what does that tell a person in the aftermath of a life changing event? By only showing triumph and success you run the serious risk of downplaying or ignoring the life changing difficulties of catastrophic injury, and by doing so you may inadvertently demoralise someone during the hardest time of their life.

From my personal experience in the months immediately after my injury, bedbound, inconsolably hopeless and deeply depressed, it was reading books like Solzhenitsyn’s The Gulag Archipelago and Viktor Frankl’s Man’s Search for Meaning that, unbelievably, gave me the solace and companionship I could find nowhere else. The former is a selection of accounts from Soviet labour camps in the 20th century, and the latter is a Jewish psychiatrist’s account of his imprisonment in Auschwitz.

You would think these books that dissected human suffering would only amplify my own, but instead the opposite was true; as I spent day after day and week after week confined to bed, feeling very much like the victim of a profound injustice and that my life was no longer worth living. I came to the conclusion that these people were my people. We had something in common. I was not alone in the universe. It is said that misery loves company, and sometimes you need that company when you’re down in the trenches.

I now believe that what I really needed at that time was someone to tell me yes, what you are experiencing is awful, it’s worse than what most people will ever experience, and it will be really, really bad for a while- but not forever. You can still live a good life. I think it takes courage to say that first sentence, but without it you cannot address reality and your words will be saccharine and hollow. Think about it; if you don’t acknowledge the things you have lost, you are believing you were wrong to value them in the first place.

By saying that it doesn’t matter that you can’t do something you love any more, are you not also telling yourself that it wasn’t important? I think that’s wrong. It is better to have loved and lost, and you can’t admit one without the other. I’m not saying give up; I will still teach my future children to ride a bike, albeit in a different way, but I’m sure that I would always have preferred to do it the way I wanted to before my injury.

So, what am I trying to tell you? Be kind to yourself. Appreciate all the hard work you have done to get where you are. You’re allowed to acknowledge that you have been given a harder life to lead. We shouldn’t just be proud of how close we come to returning our lives to how they were before, of walking again, or returning to our favourite sports or hobbies, or keeping fundamental parts of who we are intact. We should also be proud of the strength it takes to move on from those things we have to leave behind and the courage it takes to let go and start again.

– Follow Ed Hudson on social media at @EdandNeck
– Check out his site: Edandneck.com