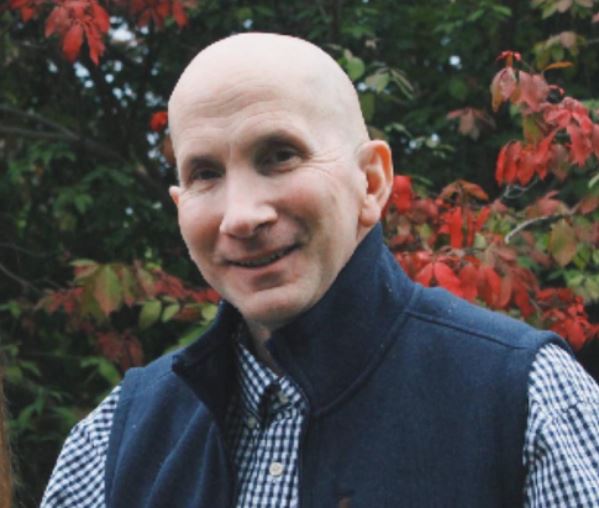 (Dave, a husband and father of 2, is an incomplete walking C3 quadriplegic from Kentucky and the author or Ironclad Journey)

On the morning of July 1st, 2017, 3 friends and I went for a bicycle ride in the rolling hills of Southern Indiana. We had all just completed a half Ironman triathlon. I was continuing my training for Ironman Louisville. Nearing the end of a 30 mile ride, we were on our last hill.

As we descended the hill, a vehicle came around a corner and I knew I was going to hit them. Next thing I knew I was lying in the road unable to feel how I was positioned. My friends said don’t worry about it; just don’t move.

In the ambulance the medic did a quick check. I couldn’t feel or move anything below my shoulders. At the hospital, we were informed I broke my C3 vertebrae and T5 vertebrae. Also my nose. I had surgery 4 days later and now I’m fused from C2 – C6.

After 2 weeks in ICU, I was moved to Frazier Rehab in Louisville, Kentucky. I had no idea Frazier is one of the top rehab hospitals in the US for spinal cord injury. I started intense therapy right away. There’s no lying around here. I loved it. I was used to tough workouts, so this was definitely in my wheel house.

The therapy was tougher than any training I’ve ever done; both mentally and physically. I was inpatient for 65 days and outpatient therapy started September 2017. Getting as much movement back was always one of my goals. Getting back to work was another big goal. After 3 1/2 years of outpatient therapy, my wife and I decided it was time to get back to work and be a part of society again.

I worked for UPS since 1994 in their flight control department as an aircraft dispatcher. I had to go through training again since I’d been gone for so long. After 3 months of classroom and on-the-job training, I was able to get my certification back. We had to get a special waiver from the FAA and vocational rehab assisted in getting adaptive equipment to make it happen. It’s been quite the journey.