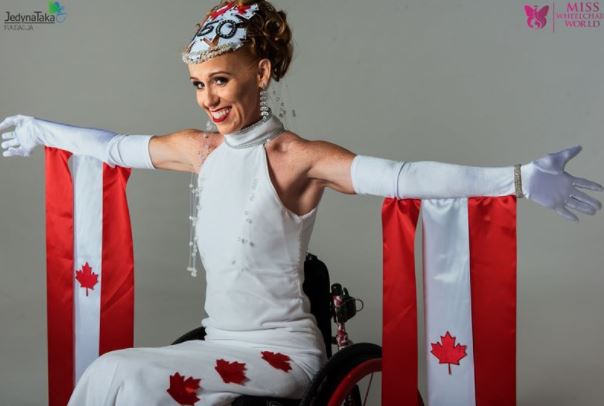 A spinal cord injury always comes when you least expect it. For Vahen King, her paralysis arrived at one of the happiest times of her life – an engagement – but she hasn’t let it stop her. She’s the first ever Ms. Wheelchair Canada, a published author and she works as a certified life coach and ordained minister. Reaching these goals post-injury wasn’t easy however. Vahen had to fight some serious personal demons.

Her inner-perseverance is quite extraordinary. What makes Vahen’s story unique is that it’s laced with a faith component and a love story; a man (who’s now her husband) who’s been with her the entire way. Now full of direction and determined to help the world anyway she can, she’s become a force on wheels you will never forget. Read on to learn the full story of Vahen King.

A resident of Edmonton, Alberta, Canada, Vahen’s faith has been the biggest determiner of her life. A life-long Christian, she fell in love with Jesus as a little girl, and by the time she graduated from high school in 1992, she had decided to attend a popular bible college. While she was in school, true love struck. She met a man and 9 months later they were engaged. A week after their engagement however, Vahen found herself paralyzed.

After being rushed to the ER, she WAS diagnosed with Transverse Myelitis. Suddenly, Vahen was paralyzed from the chest down. Only 24 years old at the time, she was in shock and angry with God. She did gain a significant amount of function back and is now (function-wise) an incomplete paraplegic, but Vahen uses a wheelchair most of the day (although she can stand and walk short distances).

After her injury, she doubted herself and asked her fiancé if he still wanted her. He replied, “God gave you to me. I am not going to send you back.” They married, but shortly afterwards the couple began to encounter difficulties. Vahen had a miscarriage, and after graduating from college, she didn’t feel grounded. Someho, Vahen overcame her depression by restoring her faith, and was able to become a certified life coach as well and an ordained minister. Vahen is now focused on helping others.

She also wrote an autobiography in 2016 called Going Farther in fact. Her book chronicles her injury and journey afterwards. Vahen is also a motivational speaker and makes videos that give great how-to/coping advice to SCI survivors. Her YouTube channel can be found below.

Vahen is such a positive force of energy that she also won the first ever Ms. Wheelchair Canada pageant last year. She represented her country in Poland at the Miss Wheelchair World pageant last Fall. While she did not place in the top three, Vahen did win the Miss Kindness Award, which if you ask us is just as good.

Vahen is now loving life more than ever before these days. She keeps busy running her own ministry, a life coach business and she keeps a tight speaking schedule. Becoming Ms. Wheelchair Canada opened up many avenues of connecting with the media and to the world. Vahen tries to release a new video each month and she works out at home/does PT at-home often. She loves sharing her incomplete skills in these videos like walking, riding a tricycle and walking down stairs.

Vahen also sings at her ministry’s weekly service, spreading her positive energy that method as well. No matter how you encounter Vahen’s spirit, she has the ability to lift you up in some way. So many people with paralysis can be surrounded by dark energy. Her profound spirit is one to behold. And we are thrilled she’s sharing more via video.

The world could always use a few more Vahen Kings. She is truly an original.

– THIS IS YOUR STORY – Vahen King

– Discovering the Power in me – by Vahen King

A born and bred explorer and river rafter who’s even worked in Hollywood, Kelley Kalafatich is one of the world’s most talented female rafters. Having been all over the world exploring rivers, her carefree life was sidelined by something she couldn’t even see.

Kelley has not only managed to move on after a permanently debilitating illness, she’s figured out she has a lot more inner strength than she ever realized; that’s right the “tough river rafter lady” with no fear. For a peek at this incredibly inspiring woman, here is the story of our SCI Superstar this week, Kelley Kalafatich.

Growing up in the Sierra Nevadas greatly influenced Kelley. She fell in love with the river as a young woman, realizing she loved to raft down them. By the time 1979 came she was 18 years old and fiercely wanting to become river guide. It took some work to prove her abilities, but soon river rafting companies were calling her for her help.

As the years progressed, Kelley’s river skills continue to grow, so much so that she was asked to be Meryl Streep’s stunt-double in The River Wild. And then a few years after that, she was asked by some close friends if she’d like to accompany them to Africa, specifically to explore a region of the Blue Nile River that had yet to be rifled through; always exciting no matter your ability.

But while there, while wading in perfectly warm water adjusting their kayak, she came into contact with a waterborne virus that entered her body; everyone there in fact that day was conducted by this virus. And three years later the virus decided to no longer lay dormant in Kelley’s body. By October 2010, she had developed Transverse Myelitis and was paralyzed from the waist down. That is how quickly it took the virus to attack her spinal cord.

Since becoming paralyzed, Kelley has worked incredibly hard to retain some independence and return of function. In the early years of her recovery, she was huge into cycling and her at-home exercise program, but a couple of years after her injury she began experiencing extreme neuropathic pain.

This past summer the pain was at its worst and Kelley had to be hospitalized. After a first failed attempt with one pain-relieving pump, Kelley tried another one. The second pump however had issues as well, causing Kelley to get a severe infection that required her to be hospitalized. Fortunately, she’s now out of the hospital and is once again focusing on returning to a normal life.

It’s never easy losing your so-called identity with the onset of your spinal cord injury, but that always seems to happen no matter who you are. Kelley proves you got to fight. You may not be as good as you were before, and that’s perfectly ok. All that matters is that you try.

What measures have you taken to limit your neurological pain?

– Give Forward Online Fundraiser for Kelley: Kelley Kalafatich – Give Her Back Her Life!

– Follow Kelley’s updates: The Journey to Recovery for Kelley Kalafatich

– Living with Courage: Embracing Fear to Follow Your Heart: Kelley Kalafatich at TEDxBend