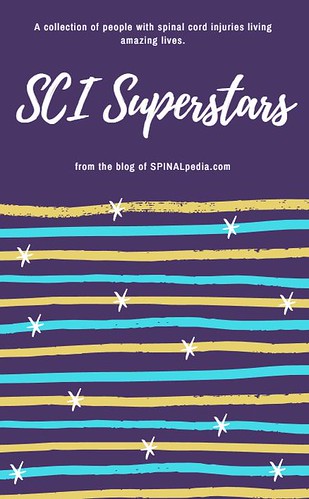 Beauty comes in many forms and Jordan Bone, a C6 quad from Norfolk, UK, may be one of the best examples of this age old adage. Injured 10 years ago in a car accident when she was just 15, Jordan has gone on to become one of the internet’s rising makeup vloggers, and 2014 has been her year.

From being honored by the UK’s Prime Minister for her tireless work in road safety to being interviewed by some of UK’s top makeup artists, Jordan’s fame is skyrocketing. A popular motivational speaker for the Fixers organization as well, who knows what the future holds for this dynamic lady.

To see how a woman pulled herself out of depression with just a camera, high quality makeup and an eager audience, read on for the awesome story of Jordan Bone.

Jordan was injured in a car accident, but the accident wasn’t her fault in the least. While walking down the side of a road with a girlfriend one afternoon, some male friends stopped and asked if they needed a ride. Jordan hesitated knowing the driver just got his license, but she agreed to ride him anyways.

The driver ended up driving too quickly, and crashing the car after hitting a puddle. Everyone in the car was ok except Jordan, who sustained a C6 injury. “I knew as I was lying there something was wrong,” she says, as she was trying to move but couldn’t. And after her initial rehab and going back home, Jordan was depressed like many of us also get, unsure of what kind of future held in store for her.

The one thing however that kept her sane in the hospital was keeping up on her makeup skills, which was not easy since she no longer had any finger movement. “There is so much I need help with in day-to-day life,” says Jordan, “being able to at least put on my makeup feels amazing.”

After attending university post-injury (and leaving because she wasn’t happy there), Jordan decided to do something creative with her life, and artistic expression though makeup is one of the things she enjoys the most. She founded her blog – Jordan’s Beautiful Life – a couple of years ago and made it an unique beauty blog, with everything from make-up tutorials to beauty product hauls, but from her SCI perspective.

Recently Jordan received over 10,000 subscribers to her YouTube channel; a huge feat for any blogger. And she was spotlighted by the Prime Minister of the UK on Twitter recently for her advocacy work with the Fixers organization, where she goes to high schools and driving programs talking about the importance of using caution when behind the wheel.

With a fresh face, her boyfriend, mom and her little doggies by her side, Jordan and is ready to take on the world, and gosh darn it does she make it look good.

Have you tried Jordan’s make-up tutorials?

– ‘AMAZING NOT INVINCIBLE:’ My Story

– Get Ready With Me ~ Naked 3 Palette makeup tutorial

– Jordan’s Vlog of her trip to Miami for biofeedback