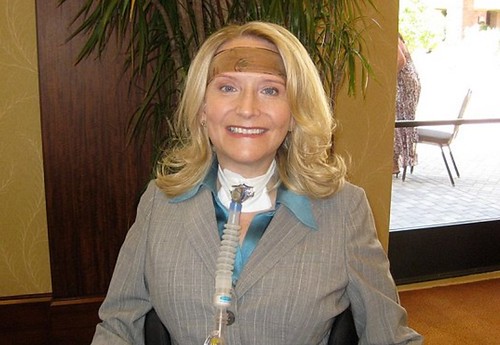 Tragedy hits all of us eventually, but it’s how we transcend it that defines us. Heather Grossman has truly transcended her injury. Shot by a man hired by her ex-husband, she wound up a C2 vent-dependent quadriplegic. She was 31 with three young children at the time of her injury.

But she didn’t let her injury overwhelm her. She’s become an advocate against domestic violence and a consultant to the Justice Department’s Office for Victims of Crime. She is also writing an autobiography and is even in talks with Lifetime to create a movie about her life. Read more about this domestic abuse survivor who’s not afraid to speak the truth below.

While riding in the car with her new husband in 1997 (she had been married previously to a wealthy car dealer in the Florida), Heather was shot. The shooter struck her C2 vertebrae, and her new husband was grazed. The cause? Heather had been deeply embroiled in legal matters at the time regarding child support with her ex-husband, which prosecutors say caused his murderous deed.

After years of hiding out in Mexico, her ex-husband was found guilty of murder in 2006 (as well as the shooter) and both are now serving life in prison. Heather has been as vent-dependent quadriplegic for the last 18 years, but the amazing thing about her, who had three children from before her injury, is that she hasn’t let her injury ruin her.

She’s been able to raise her three children (two boys and a girl) into three accomplished adults and has become an outspoken voice against domestic violence. Heather started a nonprofit called Heather’s Haven of Hope to benefit of the most innocent victims of domestic violence, the children, and she speaks at conferences and seminars on domestic violence, educating others of the danger, the signs to watch for and how to survive.

One of the most impressive things Heather however is that she became a consultant to the Justice Department’s Office for Victims of Crime in Washington, D.C. She’s been able to meet many high profile political figures in this role, and was especially close with our most recent president, George H. Bush.

Heather has also had some very generous support throughout the years. In 2009 she totaled her van, but three years later she was able to receive a free one from VMI. She’s also been a fervent supporter of staying in shape. During the last 17 years of her paralysis, she’s been riding her e-stim bike three times a week for 35 minutes each time. This is some serious commitment to a cure.

While some people look at Heather’s story and only see tragedy, we see how she’s risen from the ashes. Being a survivor for her kids and working hard to improve domestic abuse laws in the US are no small tasks, and she does it with grace.

How do you get over an injury caused by a malicious deed?