3 Questions to Answer Before Filing a Spinal Cord Injury Claim
It is no secret that living with a spinal cord injury (SCI) is expensive. Medical bills for SCI patients in
Read More
View All
Send us a message 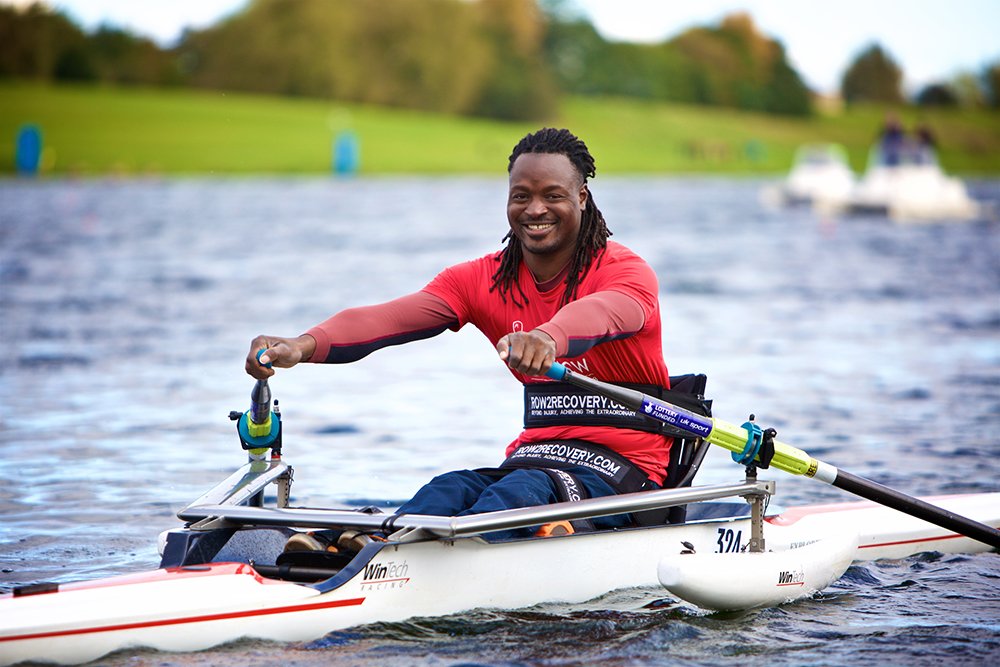 My name is Kingsley Ijomah, I was born Oct. 1st, 1982, in a city called Owerri situated in the eastern part of Nigeria. When I was 9 months old I became very ill and overnight I lost the use of my legs. Doctors later diagnosed me with Polio. I had contracted the polio virus and my life was destined to be different from that moment on.

I moved to England (East London) with my family when I was 14 years old. Today I use a pair of crutches to cover short distances and a wheelchair otherwise. My life mission to date has been to live my life to the fullest as it was originally intended. With a firm believe that my destiny has not changed and that I can chase after my dreams all the same.

I am a software engineer by profession. I am also an athlete, a para-rower to be exact, and I qualified for 2020 Paralympics in Tokyo, which is now postponed till 2021. As an entrepreneur and traveler, there is no aspect of my life today that does not stem from my disability in a proud way.

Let me share my story with you. A story of a sport I came to fall in love with. A sport that changed my life, and how it went from weekend casual hobby to me qualifying for the Paralympics.

Five years ago I started rowing. I wasn’t aware of rowing as a sport that I could take part in with my disability before that. I lived in Warwick at the time and was attending a rowing club dinner on an invitation from a friend. One of the guests who sat next to me noticed that I had my crutches by my side and asked me if I was a member of the club. I smiled and said no, I wasn’t, and by the way I am disabled so I can’t row. I was so used to being excluded it never occurred to me that there was such a thing a para-rowing.

Luckily the same fellow insisted on continuing with his questioning, he said: “Well you should join Evesham. I believe they offer adaptive rowing there. Maybe you could try that?” And that was the first time the word “adaptive” got into my world. I was curious, how could you adapt rowing; a sport predominantly done with legs to someone with Polio like myself. Curiosity got me to visit the Evesham Rowing Club the following weekend.

On arrival to Evesham’s Rowing Club, I was given a rowing machine with a fixed seat clamped onto the rowing machine track, with straps to secure my legs in place, and that was how it was adapted. The simplicity was just beautiful.

I started pulling at the rowing machine handle, slowly increasing my effort with each stroke after 600 meters I had maxed out. I was out of breath, panting and already broke a sweat. The coaches watching where impressed but I didn’t understand what the figures on the rowing machine screen meant back then, but the on-lookers liked it.

When I got off the machine, I liked the feeling of releasing so much frustration, so much trapped energy. I felt lighter as though a heavy load was lifted off my shoulders. I have impressed someone with my body’s strength. I felt strong for once. I could apply myself to something physical. I am no longer excluded from physical education because I had a disability.

It took another week before I could go out on a boat. I couldn’t wait. If I could get the same feeling on a rowing boat, that would be magical. The following weekend I re-visited the Evesham Rowing Club and used the same fixed seat was but it was on a rowing boat. There were floats attached for balance and two blades attached and away I went.

Adding motion to the rowing experience was like magi. It felt like walking on water. Boat rowing unlike rowing machine requires a lot of technique before brute force can be applied. The coordinated placement of blades, feathering blade spoons before they are buried in the water, pulling evenly to steady the boat and move in a straight line, trusting each stroke since rowing means moving backwards; it was magic every time I got out on the water.

A few months, later I took part in the Oxford City Regatta and that was when I fell in love with rowing and competitions. I met various athletes with disabilities like myself, but this broadened my world. I saw my disability differently, there was space for me in this world to achieve my dreams.

Months later I was invited by British Rowing to represent England in the home and international regatta, which was held in Scotland. I won Gold in that competition, and the dream to make it to the Paralympics was born. I have as a result of rowing traveled to countries and cities that I would never have visited, met most extraordinary people from all over the world, including super stars who refuse to be stopped by their disabilities.

I feel incredibly lucky. A chance encounter at dinner became a passion sport, which led to me competing with the professionals; the best of the best at international level who’s qualified for the Paralympic games.

In October 2019, I qualified in Tunisia to represent my country of birth Nigeria to become the first Paralympic rower to come out of the country and the first male Paralympic rower from Africa to qualify for the Paralympics. Today I live in Reading, UK and take the train to the Marlow Rowing Club. I could never imagine I would be so lucky all out of a chance encounter. Is it fate or destiny? Who knows.

I do know that COVID-19 has redefined how we live and socialize today, and things will be different for a long time to come. One thing will remain the same for me however – my passion for para-rowing and the chance to be a part of the Tokyo Paralympics on the new date of August 24th, 2021.