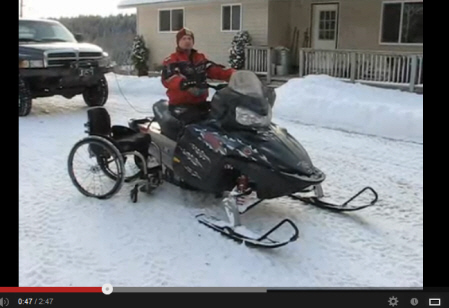 There may not be much snow anywhere in the United States right now (blame it on global warming, the natural progression in the earth’s life cycle, whatever you like), but when the snow does come, the thrill seekers on wheels will be rearing to get into some new adaptive snow sports. There’s downhill mono-skiing, but I’m talking about the gas guzzling, need for speed thrill lovers you can’t help but love – snowmobilers.

One of the first crazy things I did after my injury was go snowmobiling in -10° temperatures in Northern Minnesota. Granted it wasn’t as cool as the videos you’re about to see (my parents decided to put me in a sled behind the snowmobile- talk about adaptive snow sports!). It was still pretty fun watching the scenery go by, zooming through the forest.

The first video shows a paraplegic on a 55 mile snowmobile ride with a group of able-bodied friends. It starts out with him showing how he transfers onto his snowmobile in his driveway, which he does quite impressively. The great thing about snowmobiles is that they’re already outfitted with hand controls. Save some money on adaptations for once.

Once he’s on his sled, he takes off. Looking at him while he’s on his sled, you would never know he’s paralyzed. After the ride, he drives his snowmobile into the trailer, and his friends help lift him into his chair. Watch his video

The next video comes from one of the best paralyzed snowmobilers on the planet – Trevor Moen. From Kelowna, British Columbia, where winter sports reign supreme, his injury hasn’t stopped him from snowmobiling; sometimes clocking up to 100 miles per hour. In this how-to video, Trevor shows how he gets onto his sled for a beautiful Boxing Day ride at Greystrokes, an area with awesome trails and narrow roads near his home.

He rides a yellow and blue Ski Do X RS, and first shows how to do the transfer in his garage. He again is a lucky paraplegic who has no problem transferring himself from his lightweight wheelchair (with no armrests) up and into his sled’s seat. Once he’s in (no legs straps. I’m guessing they just stay?), he takes off to ride super fast on some freshly laid powder. He has a camera on his helmet so you can see everything from his perspective. Watch here

The last video shows a female getting in on some snowmobiling action. Her name is Jana Shefler, aka Jana Banana, who has quite the following on Facebook. In this video, her and her husband go snowmobiling in Colorado. She first gets help transferring onto the sled, then her group takes off for a beautiful ride on a trail lined with Evergreen trees. What I love about the short 1:15 video is that it shows how beautiful some of the trails can be as she enjoys one of her favorite adaptive snow sports. Watch

If you’ve never ridden a snowmobile before and have always been curious, do not let your paralysis stop you. If you don’t mind a little bit of cold and gas fumes, you’re in for one of the best adrenaline rushes of your life. I promise.

Do you love snowmobiling? What other adaptive snow sports do you enjoy? Any low-quads out there ride? We’d love to hear from you!

Watch the videos of snowmobiling as an adaptive snow sport!

– Paraplegic showing how he transfers onto sled, and goes on a 55 mi ride