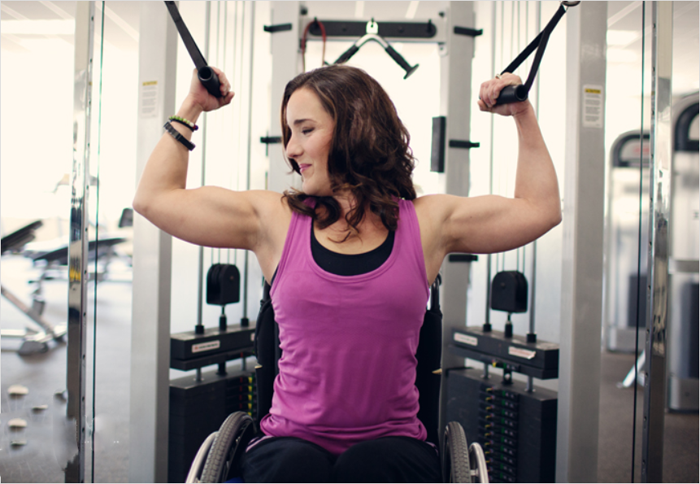 Bodybuilding is a sport that celebrates the human body, which is why so many SCIers are drawn to it (we love making what we still got as awesome as possible). But for Shannon Chisholm, she was in love with bodybuilding long before her injury.

Her journey into bodybuilding began over 10 years ago when she decided to change her lifestyle after being diagnosed with Crohn’s disease. The bodybuilding and healthy diet worked, and she was a successful amateur bodybuilder for several years. But her world changed nearly 2 years ago while riding her bicycle to the gym one morning.

Read on for the awesome story of a full-time mother, wife to a high school sweetheart and one of the best paralyzed bodybuilders currently competing,  Shannon Chisholm.

Shannon, 37, grew up in Western North Carolina, which is where she still lives today. She was living a pretty great life. She was a physical therapist assistant and was married to her husband Ray and had two kids.  She was also an amateur bodybuilder, but while riding her bicycle to the gym on July 12th, 2011, a car hit her from behind, permanently paralyzing her.

As crazy as it sounds, Shannon was lucky though because she was wearing a helmet. When she was hit she flew up in the air and landed really hard, breaking her back at T11 and sustaining a complete injury. She still keeps her bloody helmet in her garage as a reminder of that fateful day.

Since Shannon was a bodybuilder before her injury, she was able to fly through rehab faster than most people. After being in the hospital for nine weeks, she was transferred to the famed Shepherd Rehab Center where she impressed and inspired everyone there. She was able to master all her transfers (from bed to floor from car to wheelchair; all of them), in just one week.

For Shannon though, being able to fly through rehab was only one of the good things to come out of her hospital stay. She was also left with a mountain of medical bills because unfortunately she and her husband didn’t have any health insurance at the time of her injury. Her friends however have helped out, organizing a benefit on her behalf – the Chisholm Champion Challenge – where they raised $10,000 for her medical bills a few months after her injury.

Shannon was also determined to return to bodybuilding even though she could no longer compete in the same category. Just 9 months post-injury, was back at her first competition as a paraplegic, and decided to just go, have fun and enjoy herself to get over her nerves. And awesomely, she won first place.

Shannon also been a guest poser an able-bodied competitions, including the Carolina Supernatural Bodybuilding Championship, and has posed at several competition winning many trophies a long way in the wheelchair category. Watch her pose at the INBF Drug Free Wheelchair Nationals

Shannon has also decided to use her injury as a platform for advocacy to help improve the safety on the roads when it comes to bicyclists and cars. Shannon’s injury was not the first caused by a car, and it will not be the last. She has been working with the Asheville on Bikes organization, a bicycling safety group, giving testimony of her accident at public events. Read about her involvement

And Shannon’s day-to-day life has normalized. Just last month she returned to work as a PT assistant, and her home is currently bring remodeled to better accommodate her wheelchair. Lots of big changes for life to continue. I think a few of us out there can relate to this (smirk). You just got to love her fierce determination to carry on.

Strong inside and out, Shannon is one major tough chic.

How have you found strength post-injury?