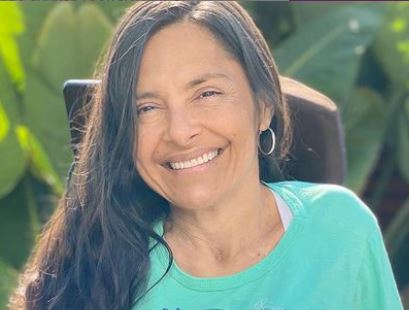 (Kat, a C1 quadriplegic from California is a retired Air Force major and former bodybuilder originally from Belize)

On December 5, 2015, Katherine (Kat) Portillo found herself hanging upside down in the car seat after a dramatic rollover accident on the 405 freeway in Los Angeles, California.

A Bump In The Road Changed Their Lives for Ever

On their way to a Christmas party, Kat began searching her iPhone to play Christmas music. Neither Kat nor Pavel (her husband ) know what their car hit: something on the road launched the vehicle into a rollover collision, as Pavel grasped the steering wheel, it had locked up making him unable to right the car. The Range Rover careened into a light post and landed upside down smashing into Kat’s passenger side.

Pavel’s head smashed into the driver’s side window, fracturing his skull and his C1 vertebrae. Kat fractured her C4 and C5 vertebrae, which punctured her spinal cord and instantly paralyzed her from the upper chest down, including her arms. In addition, she had open fractures in her left lower leg, which was broken in eight different places.
She was unable to release herself from her seat and thought she had only broken her arms. Pavel believes that his wife’s Air Force training helped save them. Still very conscious, she yelled, “Go out to the freeway and get help!”

Growing up in Belize

Kat was born in Belize in 1978. Her mother’s boyfriend put his name on her birth certificate, even though the “parents” had met after Kat’s mother was already pregnant. Their relationship did not last, and Kat remembers having a difficult, physically, emotionally, and sexually abused-filled childhood. Perhaps because of this abuse, Kat became rebellious, moving back and forth between her biological mother, foster parents, and even adoptive parents in America – a short-lived adoption.

Eventually, she turned to exercise. “In the midst of chaos, exercising was something I could control. It empowered me, boosted my confidence, and provided therapy while I was battling depression,” she says. Since her mother’s previous boyfriend was an American and his name was on her birth certificate, Kat was also allowed American citizenship and began the process of joining the Air Force when she was 17 years old.

A Drive To Succeed

Katherine (Kat) Portillo enlisted in the US Air Force for 5 years working in logistics at Maxwell Air Force Base, AL. She earned a scholarship and completed her bachelor’s degree in exercise physiology from Auburn University Montgomery in 2004. After returning to Air Force service as a commissioned officer, Kat served as a satellite vehicle operator in Colorado Springs. She then earned a master’s degree in aeronautical science from Embry-Riddle Aeronautical University in December of 2009.

While in the military, she ran marathons, competed in a 100-mile bike race, several sprint triathlons, and even did the Malibu Olympic-Distance Triathlon, comprising a 1.5K swim in the Pacific Ocean, a 40K bike course along the Pacific Coast Highway, and a 10K run along Zuma Beach.

She liked doing the races, but didn’t like the scrawny look it gave her, so Kat started training with weights to increase her muscle mass. She competed in bikini competitions, winning first place, and won an International Federation of Bodybuilding and Fitness (IFBB) pro card in June of 2012 at the NPC Junior National Championships in Chicago.

At a fitness event in Los Angeles, Kat met her husband, Pavel, a fitness photographer she instantly connected with. Two and a half years later, in December of 2014, she and Pavel married after a fairytale proposal and beach wedding in Belize. She was promoted to the rank of Major in the Air Force in June of 2015 – marking the climax of her Air Force career and personal life.

The Route To Recovery

Less than a year after their fairytale wedding, Kat and Pavel found themselves fighting for their lives with their wedding vows put to the test. Pavel walked along the freeway waving his hands as cars honked and vehicle after vehicle passed, ignoring him. A homeless man living underneath the freeway came to their rescue and called 911.

Doctors performed a 12-hour surgery, fusing the C3 to the C6 vertebrae, and also performed a tracheostomy to allow Kat to maintain an intake of air. A feeding tube was inserted to allow for the flow of nutrition. She was placed in a medically induced coma for a week.

As a result of her paralysis, Kat had neurogenic bowel and bladder dysfunction, meaning she needed catheters to relieve her bladder and enemas to have bowel movements. Also, her body could no longer regulate its temperature, and she suffers from neuropathic pain. Pavel and the rest of Kat’s family were told that Kat’s chance of survival was approximately 10 percent.

But Kat didn’t know about any of this, she says, until approximately a week later. She explains, “When I woke up, I panicked, wondering what had happened to my husband.” When he walked into Kat’s ICU room with a halo brace screwed into his skull and shoulders, allowing him to recover from his fractured C1 spinal vertebrae, she felt a huge relief. Wrapped up in worry for him, she hadn’t yet known what her own fate would be.

The Path To Acceptance

“When I was told that I was paralyzed from my shoulders down, it didn’t register,” she says. “I thought it would just take some time to heal. I told my friends in the Air Force, I’d need some time off, but that I’d back to work soon. I still didn’t understand my prognosis at that time. I was in complete denial.”

Kat had served for 18 years on active duty when she was medically retired from the US Air Force with honors. Kat had to come to terms with the military’s assessment, leaving the institution she had served for half of her life, grateful for the experiences, knowledge, and extended family she gained through her time in the service.

Adapting to a New Norm

After a few years of grieving her mobility loss, getting psychological help, and dealing with other near death experiences, Kat and Pavel learned to cherish each other every single day.
While Pavel got back to work, Kat has been perusing another masters degree in Psychology. She knows that understanding how our mind works could help her better cope with life now. Her priority is now managing her health so she can stay away from the hospital and be present for her husband. She stays productive managing her 4 caregivers, 4 Yorkies, and helping other spinal cord injury people through her nonprofit Angel de Amor.

Kat & Pavel have resumed some adventures such as going to Belize again! Pavel promised her friends and family back home that he would bring her back to Belize before she dies so she can reunite with her family and friends. He has written a book: True Love and Suffering: A Caretaker’s Memoir of Trauma, Despair, and Other Blessings, that has highlighted how they managed to successfully make it through the trauma.

Kat credits Pavel’s positive outlook on life to continue being adventurous. During their recent trip, Pavel transferred her to and from the wheelchair, to airplane seat, a van chair, to bed, etc… When they chartered a boat to take them on some adventures, a 4-man team transferred her from the pier onto the boat! They had a beach picnic, got to see a seahorse farm, feed some tarpons, and even did a little bar hopping!