Guest Post: I Saw This Storm Coming – The Pandemic by Antonia Sinibaldi 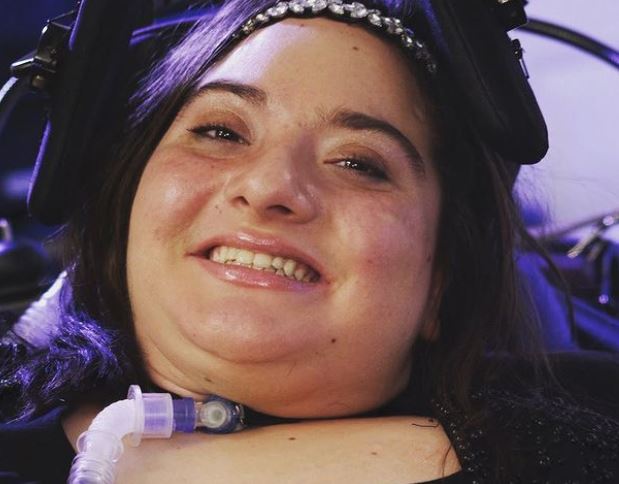 (Antonia Sinibaldi is a regular contributor and an ambassador for SPINALpedia. She is also an author and singer and has been a vent-dependent quadriplegic since she was a young girl)

It has been over a year since this pandemic has officially started. Cases started popping up in China last December, and slowly came everywhere in the world. Most of the world knows that I am on a vent, and I am classified as a long-term user. Topics such as respiratory care hits home to me because I have been on this vent ever since I was two years old. This pandemic has taken a toll on my mental state, but I saw something like this coming. I did not predict that a virus was going to shake the whole world up, but I knew some time in my lifetime there would be one day where respiratory care would be the new topic in every conversation.

Before diving too deep into my thoughts on this pandemic, I want to say that the healthcare system all over the world was not prepared for this situation, and I’m speaking based on my experiences.

First things first… Throughout my life I have said the following many different ways in order to translate my message into all different types of people; “Mechanical Ventilation is a poorly understood field and a poorly documented field”. Now the world is starting to wake up after 16 to17 short months that feel as if it has been 17 years. The thing about COVID-19 and all of the variants is that it effects everybody differently. The healthcare system or as I like to call it, “The health system without the care”, is overwhelmed at the moment. Everyone is overwhelmed. I believe that the medical system, especially the United States, was unprepared for the pandemic for many reasons.

I have a type of spinal cord injury called a pediatric spinal cord injury. At the time of my accident all of the toddlers died and were unable to be revived. That same thing happened to me. Twice. Now, I am currently in my 20s, where most people would consider me to be young. However, I have aged many years due to my disability.
The thing about spinal cord injury is that the younger the age of onset of injury the less the body knows what to do. My injuries are the second, third, fourth and fifth levels of the cervical spine. Those areas are in control of breathing and hand and arm movements. This body does not fully know what it is like to breathe because of how young I was when my accident occurred. That does not mean that my body does not try.

There is a complete difference in physiologically and improvements based on age and level. Their is a difference between a body that knows what it is like to breathe and move that forgot as if someone got into an accident later on in life vs a body that is barely figuring out what to do like mine. I was two years old and have been trying to ween off of the vent many times throughout my life. I am still trying, but it has been very difficult for me because of my spinal cord injury.

I need to adjust the settings on my vent daily in order to manage my spasticity, my singing, my breathing pacemaker, for eating and drinking to some extent. Before I was vent literate as I am now I used to need Bagging when I would be spasming. I still use it once in awhile but not nearly as I used to do because I have learned how my vent works inside and out; instead I adjust the settings to what I need. Right now I am trying to learn and compare all of the different types of vents and their settings .

In regards to the pandemic, This is where the “Healthcare” system comes in and the flaws are exposed. I am from New Jersey and I have been on a ventilator since I was two years old. The hospitals throughout the country and those in my area do not use modern ventilators such as the “LTVs” the “Trilogies” and a few others. Inside most hospitals in different areas of the hospitals they still use older ventilators that can only do so much and are not user friendly.

I will take it one step further… In order to ween a patient off of a vent they use two of the same techniques. These techniques are called “GPB” and slowly disconnecting. Hospitals are beginning to universally use a setting called “pressure support” by slowly dropping the numbers as the new modern way to get somebody off of a ventilator.

The pandemic showed that doctors and healthcare professionals need to think outside the box and adjust the settings on different kinds of ventilators. Throughout my life this new way thinking was not widely used because it is not by the “book”. The virus is making people think outside the “book”. People need to write their own medical book. I did that and now other hospitals around the world are starting to do that as well.

Ever since this virus came to the U.S. I have been under house arrest. Even I underestimated this virus but as I mentioned previously, I saw something like this coming where ventilators would be in dire need for the public. The thing about being on a vent for so long is that people think one has it easier. The vent and the human body have to constantly play together. COVID-19 is so scary and unique that the long-term effects are something that people have never faced before in prior medical situations. Some people are on a vent for two weeks, come out and then go back on. In some locations, specifically those local to myself, some hospitals let the patients go out once their symptoms have faded but let them go with an order for home oxygen. The body never recovers for the majority of people.

Now that the demand is so high for oxygen tanks, nebulizers, concentrators and ventilators the supply companies that people like myself use are not able to get the equipment that they need. Society has spoken so condescending to people like me in terms of ventilators and not in a good way. Many people say that the ventilator and tubings are easier than breathing. That suctioning is better than coughing. The whole world does not know what they are up against and now the medical supply companies are overwhelmed because of the demand due to the new cases.

Now, people need to take this thing seriously. Young people in my age group, all of you need to take this thing seriously. I am young but I am old. I can translate to all ages. People don’t realize the effects on the body vs being on a ventilator. My ventilator takes in the air around me and that is why people should socially distance, wear masks and listen to the science and recommendations from the CDC. I have not been able to leave my house since this thing started. I have only been able to leave for doctor appointments. Young people do not realize or seem to care about how serious everything is. I still have to wear a mask if I am out, that cover my nose and mouth; I can’t cover the filters on my vent because that will block out my air. When the pandemic began it was difficult for me to wear a mask like everyone else because it does block out some air and makes the vent harder to pull in. My body adjusted and now I can wear the mask and feel my vent but still under house arrest.

Young people, I am talking to all of us. Be careful because the vent inhales everything. if you test positive for COVID-19 it can spread for miles and someone else on a vent can pick it up. I did not have anyone who looks like me or as vent literate as I am. I am also a singer on a vent but my main goal is to be a disability activist and advocate. I am on all social media (Instagram, Twitter, Youtube, Facebook and GoodReads) if anyone wants to ask questions or compare notes. You can contact me through my website or my social media. I am a disability activist and everything else is secondary.