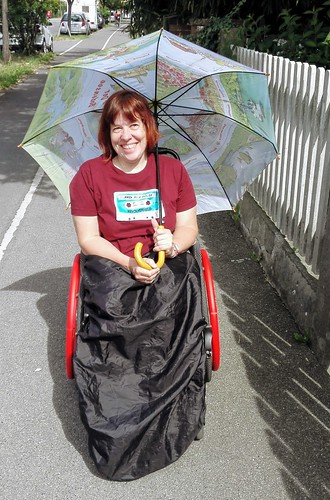 It would be fair to say that nature isn’t the most wheelchair friendly, and especially when it comes to the rain. From bulky raincoats to umbrellas that just don’t reach everywhere (leaving knees and shoes wet!), what’s a wheelchair-user to do?

Annette Flowe, a paraplegic from Germany, was sick of getting wet every time it rained at her beloved annual music festival each summer. But it was this experience that inspired her to come up with her ingenious idea. It may seem simple on face value, but it took someone like Annette with her German sensibility to realize that it was high time a quality waterproof leg protector was created for wheelchair-users.

“For over 15 years, I have been going to the same music festival in East Germany, which takes place on the first weekend of July. There are a lot of open air stages and although the weather is usually good, almost every year there is at least one heavy rain shower during the weekend,” says Annette.

One year after a rain shower began, everyone pulled out compact raincoats, leaving Annette feeling like she needed one too. “My legs got soaking wet and it felt really uncomfortable (additionally to the fact that I was likely to catch a cold wearing wet clothes all day….). I thought that there should be something that you can pull out of your backpack quickly when you get caught in a shower, like all the fancy rain coats that people were suddenly producing out of somewhere.”

And she says wheelchair ponchos don’t cut it, as most of them aren’t 100% waterproof. “After the festival experience about 15 years ago, I made my first prototype of the product out of shower curtain fabric just for my own, personal use.” “However I realized that there was a gap in the market for this product since every leg cover I had seen so far was really big and bulky and not really meant for spontaneous-use.”

“For my upper-body, I just used my favorite rain jacket or sometimes cheap one-way ponchos, but my legs always got wet, which really irritated me. I wanted a product just as light and easy to use as a one-way rain poncho.” To make her a vision of reality, she teamed up with Dr. Eugene Emmer, a longtime colleague, to create a prototype of her idea and to help her market it. ”

“I have known Annette for probably about 10 years,” says Dr. Eugene Emmer, who helped Annette develop the product. “In October 2017, she suggested developing a rain cover for the legs of wheelchair-users, saying that it is a huge problem for wheelchair-users and she had made a simple version for herself from shower curtain material.”

It doesn’t matter if you’re a low level paraplegic or a high level quadriplegic, if you’re sitting in a wheelchair, the physics of saying dry is nearly impossible. And the response Dr. Emmer received on behalf of Annette’s waterproof leg protector idea was huge. “47 people responded to our poll and to the question ‘Does your rain solution keep your legs dry?’ A surprising 84% said no!”

To understand what wheelchair-users needed even more OF, Dr. Emmer put together a group of 10 testers who use wheelchairs from around the world, including USA, Scotland, England, Germany and Lithuania. He sent a sample leg protector to each tester to get feedback. They received a lot of responses, from helping wheelchair-users find better ways to keep the protector on their legs to finding a better way to keep it on their lower legs.

“The testers also complained that their legs were protected but water was pooling on their seat cushion. So we created a special lap protector that attaches to the cover and tucks under the seat cushion,” says Dr. Emmer. “The testers asked for other modifications as well (finger loops to more easily put the protector into place, a larger carrying case, etc).”

After the testing was completed, they decided to call it Rayne Shield. It can fold compactly into its carrying case as well so it can be stored safely and securely with you whenever it starts to rain. It also is available six different colors, including camouflage. The cost is $65, plus shipping to the United States. Look for the Rayne Shield to be available online late this summer.