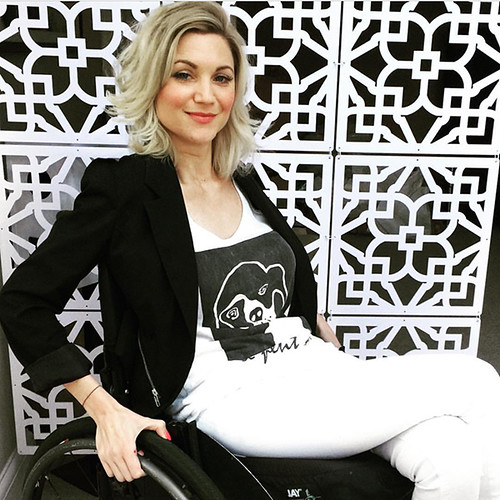 Helping women feel beautiful has been Heidi Herkes’ world since beginning her career in the beauty industry over 15 years ago. A former high-end bridal beauty business owner from the UK who traveled worldwide for her job, she’s been working hard to forge a new career for herself since her injury, and she’s successfully done it.

Heidi has refused to allow her injury to stop her from following her passion in the beauty industry. She can’t use her hands the way she used to as a C6 quad, which has forced her to think of new ways to share her talents. She’s transitioned from a wedding beauty consultant to a personal stylist and we can’t wait to see where her new career direction takes her.

Determined, beautiful and stronger than she’s ever been before in her life, read on to see how Heidi has proven no match for a spinal cord injury.

A Londoner and a graduate of King’s College, Heidi worked over 15 years in the beauty industry before her entire world was changed. Doing beauty consults for brides in cities like Sydney, Dubai, Auckland Berlin and throughout the United States was a great gig. But then in 2014, a freak accident occurred. Heidi became paralyzed after falling down a flight of stairs while overseas.

“I had to rethink my approach to life and work completely,” she says. “Not only did it have a resonating effect on my life at the time, it also showed me first-hand how enormous an impact it had on the way I looked and felt. My confidence and self-esteem were at ground zero. I was faced daily with the difficulty of not being able to express myself as the woman I once was.”

After taking over a year to recover, she began to think about returning to the industry. Heidi thought about how she could utilize her skills in their best way, and she brilliantly thought of becoming a personal fashion consultant for women of all sizes, shapes and backgrounds. “I soon realized that despite the accident, this was something that resonated deeply with me and was something I wanted to pursue.”

As a result, Heidi launched her new business, Heidi Herkes Personal Style Consultancy, in October 2016 and she is one of the few, if not the only, personal style consultant with a SCI in the world.

Heidi offers her services to all, AB and disabled, and she styles a wide variety of sizes. Her style consultancy involves a fun three step process: #1. Personal style session. #2. Wardrobe styling session, and #3. Personal shopping and styling session. For anyone who could really use fashion advice from experts, you can’t get better than this. She’ll even give you a color analysis.

Since launching her business, Heidi has helped dozens of women feel more beautiful, including Jemima Green, a newly injured woman and horse lover who partook in a glamorous photoshoot with the help of Heidi as her stylist consultant. See the photos and read how Heidi impacted Jemima’s life here: The Beauty of Wings

Heidi has stayed true to herself in spite of her SCI. Whether she’s traveling the world when she’s not working with the love of her life or simply dreaming up her next big career move, we love her for her ferocious tenacity and wish her all the best.

The latest wheelchair fashion designer to throw her hat into the ring, Heidi McKenzie is unlike any other wheelchair designer of there. A paraplegic since her early twenties, Heidi has owned being a woman with a spinal cord injury, competing in Ms. Wheelchair America and now her latest venture – becoming a business woman -since her injury.

But her latest venture, creating customized wheelchair clothing, is what has launched her into fame this past year. From appearing on local media to being profiled on some of the biggest websites online, Heidi’s grand “coming out” last year with her brand (which included a successful Kickstarter campaign) has been phenomenal.

Heidi’s story begins on a foggy curvy road in 2007 when she was 21 years old. Home was far way in Mount Sterling, Kentucky, and she was in Ohio, driving on a road she wasn’t familiar with. She hit a big curve and hit a tree, breaking her back at T-4, as well as her arm in several places (which required metal plates to heal).

Heidi spent 3 months in rehab, and was discharged to begin her new life; but she was lost. She had been planning on going to college to study fashion merchandising before her injury, but now that she was a paraplegic, she didn’t think the industry was for her. Would she be accepted? Would she be able to travel around the world as a buyer?

Instead, she went home to work for her father’s concrete company as a bookkeeper, which she did for five years, and it wasn’t until 2012, five years after her injury, when her entire perspective shifted when she ran for Ms. Wheelchair Kentucky. Winning isn’t what changed her, it was going to the Ms. Wheelchair America pageant that did.

At this pageant, Heidi met dozens of other women in wheelchairs she could relate to, and it was here she finally realized she wasn’t alone in her struggles. She heard over and over again from her fellow contestants about their fashion struggles, and that the clothing options out there weren’t as great as they’d like. After coming home from the pageant, she was forever changed.

Heidi may not have won Ms. Wheelchair America that year, but she won in a much bigger way. She was inspired to return to fashion, and the first garment she wanted to tackle – jeans. She named her company Alter Ur Ego, helping people with disabilities show their true selves.

Her jeans have a slight stretch, a high back and come in custom lengths. They’re also available for both men and women. And they have two other ingenious design elements – thigh pockets and a tummy control panel, helping wheelchair-users both look slim and get to things they’re carrying easier. You can see the full breadth of her jean design here

And in August 2015, Heidi had a hugely successful Kickstarter campaign for her company, funding her company so they can start taking jean orders by September 25th, 2015. To put your order in, visit the link to her store below.

It’s always a beautiful thing whenever someone with a spinal cord injury returns to doing something they loved before, but with an even more fervent passion now. It gives you hope that what truly does move on and that wounds can heal, which Heidi can certainly attest to.

Will you be pre-ordering a pair of Alter Ur Ego jeans?