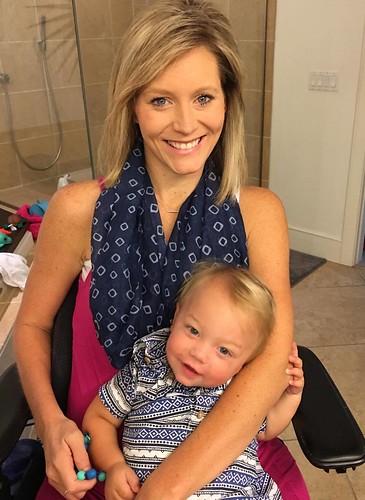 A law student and a single mom by choice, Jen Goodwin is the rolling definition of a tough cookie. With the two aforementioned titles realized post spinal cord injury, she’s been determined to beat everyone’s expectations. She wasn’t about to let her life dreams fall by the wayside after becoming paralyzed.

But there’s no denying her injury altered her life plans. As a former pharmaceutical sales rep with a brand new house, everything was falling into place when her injury occurred. Read on to see exactly how Jen moved on after becoming a quadriplegic and has set-out to change the world.

Raised in a competitive household where she and her brother competed over everything, Jen is one of those people who’s always challenged herself. She was a busy career woman in her twenties flying all around the world as a pharmaceutical sales representative, and at the age of 23 she scored the job of her dreams, allowing her to stop traveling as much and buy a home in her hometown.

But in 2008 shortly after buying her home, Jen became a C5-6 quadriplegic. While on a late night boat ride, her neighbor fell on her breaking her neck. A traumatic experience, Jen has been determined not to let her injury woefully affect her life. Fortunately, she’s blessed by the unwavering support of family and friends who’ve rallied around her.

After returning home from rehab, Jen began to see many injustices negatively impacting persons with disabilities in her community. Jen decided to take matters into her own hands and after receiving inadequate services from a lawyer in her hometown she decided to make legal changes herself. She enrolled in law school at the University of Arkansas at Little Rock, William H. Bowen School of Law in 2013 five years after her accident.

But she didn’t stop there. In her second year of law school at 32 years old, Jen began to experience full-on “baby rabies.” After weighing her choices (she wasn’t eligible to adopt from China), she decided to pursue artificial insemination through donor sperm. “I wasn’t getting any younger,” she says, fully aware of the risks older moms face because of her mother, an OBGYN nurse. After her second try, Jen became pregnant and was soon told she was having a son. Finally in 2015, Jen’s son Beckham was born. She pushed him out in 3 pushes and he came 6 weeks early.

To make solo parenting easier, Jen also moved in next to her parents and made the home next door accessible (a great idea for those who want to be near family but still want their own privacy). When raising a child as a quadriplegic, it definitely takes a village. Jen’s family has been absolutely model-worthy.

Since her injury she’s also been dabbling in modeling. A Permobil chair-user, the company used her in one of their recent campaigns showing her great fashion sense. Jen has also become very active in the disability advocacy community. Last June, she was invited to United Spinal’s Roll on Capitol Hill; an annual gathering of people with spinal cord injuries trying to make their state senators more aware of issues important to Persons with Disabilities.

What we love most about Jen however is her unforgettable confidence, which is plain to see in a recent video from Saline Memorial Hospital, sharing why she decided to become a mom and no longer wait for Mr. Right to come around. She is the epitome of going out there and getting what you want. YOU GO GIRL!

Community question: What dreams or life goals have you pursued since your injury to prove what’s possible?

– High Fashion – Behind the Scenes with Jen Goodwin

Even though she was injured over 15 years ago, you can still see remnants of her “old life” just by looking at her. A former model and go-go dancer, Teri Thorson, a Canadian Paralympian, as well as a fashion designer and mother, is one of the toughest low quads you’ll ever meet.

She’s also not afraid to go deep and talk about how she was able to overcome her dark early days post-injury. A font of awesome advice, check out the story behind one of the strongest women to hail from Canada, Teri Thorson.

Teri’s arrival into the world of spinal cord injuries was definitely an abrupt one.  She was injured in a car accident in Australia with friends while vacationing in 1997. Her friend who was driving was going 87 miles an hour on a gravel road.  When they took a turn, the car flipped three times with the roof landing on her head. She woke up a C7-8 quad, and quickly learned the seriousness of her injuries.

It took her a little bit however to get back into the groove of things, following the great advice of still following your dreams and not getting frustrated. Although she was destined for wheelchair racing, she didn’t get her first racing chair until 2001. At her level of injury, typically competitive wheelchair racing isn’t possible. As she got better though, she couldn’t believe how much stronger she became.

She was able to get rid of her PCA’s entirely, becoming fully independent as a result of her training beginning in 2002. She was also in the Athens Paralympics in 2004, making the 400 m race finals, which is a huge feat for someone with a C7-8 injury. She unfortunately however had to retire early after a wrist injury. At her level, a wrist injury pretty hard to come back from.

So she moved onto her next big goal in life – to become a fashion designer. This was a dream of hers before her injury, and she was determined to make it a reality. In 2007, she launched Normal?, a clothing line for men and women with seated bodies. The line took a brief hiatus the last few years, but is coming back strong. Check out a fashion show of her line from 2011

Another thing Teri has done since retiring is become a motivational speaker, speaking on behalf of the Rick Hansen Wheels in Motion Foundation.  She speaks frequently at schools in her area in Victoria, British Columbia, openly talking about her disability and how she’s able to do everything in life.

In 2009, her life changed again when she became a mother, having a baby boy Lucian at home, with a birthing doula. She was an insistent on having her baby as naturally as possible too, and was able to do completely safely, only needing the help of forceps at the very end. Read more about her amazing birth story on HerScoop

I think the thing I like about Teri the most is the fact she’s been able to get everything she’s wanted in life despite her spinal cord injury; you have to give credit where credit is due. While her life is certainly a little bit slower these days, being a mom does that to you, the impact of her influence on people simply by being who she is has never been stronger.

Have you worn any of Teri’s fashions?

Watch a video of Teri