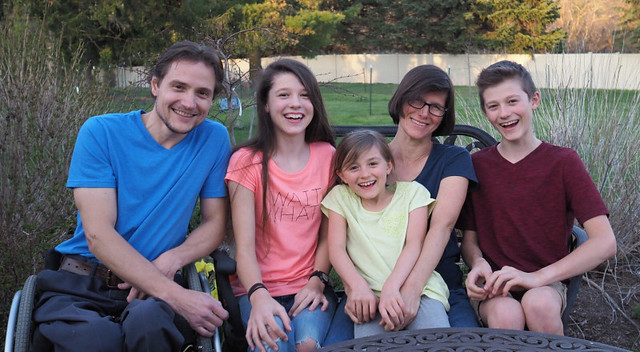 Up until a year ago, Brian Peachey, a 40 something T10 paraplegic, was living his life along with his wife and their three kids quietly in Southwestern PA. Paralyzed for a couple of decades, he and his wife met after his injury.

But last year, Peachey and his family decided to start sharing their life adventures on their new Youtube channel – Able Family Life. “Our goal is to promote positive examples on the importance of family fun and focusing on what you can do, not what you can’t,” says Peachey.

With two young teenagers and a 6-year-old daughter, Peachey also works FT as a project manager for a medical device company, he travels often in his family’s new homemade accessible RV, all the while making around one new video a week. Read on to learn more about Brian and his family below!!

While studying civil engineering at Penn State University, Peachey took on a construction job to make some money. A few weeks into the job, however, he slipped and fell. “I was assigned to a roofing job on a warehouse,” he recalls, “and while I was carrying a sheet of aluminum roofing, I lost my footing and fell about 25 feet and landed on the concrete floor.”

He could not have been further from the truth. Peachey missed just one semester of classes while he was in rehab, and he earned his degree two years later. He credits the rehab facility with stressing the importance of exercise and an active lifestyle.

“There’s a whole world of mobility aids, adaptive equipment and organizations created to help people with disabilities that you just don’t know about until you’re living in that world,” he says.“It was both a challenge, both physically and emotionally, but I had a great group of roommates that always supported me if I needed it.”

After graduating college and working at his first engineering job for the Department of Transportation, he met his future wife. “She’s never treated me any different because of my disability,” he says, “and when there are things I can’t do, we either find another way to do them, or we just do something else.”

Having children was definitely something they wanted to do as a couple. They have three kids; a pre-teen son, a teenage daughter and a younger daughter who’s six years old. Parenting from a wheelchair poses it’s certain challenges, but Peachey hasn’t been phased.

“As with everything, there are negatives that are out of your control, and there are other things you can do to make up for the negatives,” he says. “On the humorous side, there was absolutely no way around the kids running up steps to get away from me when I caught them doing something wrong.”

Their successful family life is part of the reason they decided to share their lives online. Able Family Life has more than 190 videos, highlighting all aspects of life when a family member has a disability.

The online episodes of the Peachey family include everything from family fun days with mini-golf, adventures in their RV, the kids trying out dad’s wheelchair in multiple ways ans even tips for homeschooling kids. Tune in and we think you’ll agree that Brian deserves an award for one of the best dads on wheels around.

What video from Able Family Life is your fav?

Our Favorite Videos from Brian and his Family

– My Disability Story by Lego People | Living in a Wheelchair

– WHEELCHAIR FOR A DAY CHALLENGE

Everybody loves tasty grilled food, but for many people with spinal cord injuries, they get too worried about burning themselves and just don’t even bother. Barbecue and paralysis may not be two peas in a pod, but they can coexist safely, and that is the purpose of our end-of-the-summer post.

You don’t have to live in fear of your grill any longer. Our videos will prove you can use your grill without burning yourself. All you need are a few handy tricks, like the right grill to purchase. In honor of Labor Day, we present you with three of our best barbecue videos below.

Matthew Tilford, a paraplegic from California and the man behind Chair Tips ‘n Tricks, makes dozes of videos and his videos are all about enlightening people with spinal cord injuries to what’s possible, and this video is on grilling, and more importantly – grilling safely. He loves grilling whenever he can.

In the video, he grills lemon pepper chicken and zucchini, and he shares a very important and when it comes to grilling in a wheelchair – making sure your grill is lower than your lap. This way you can have more control of the food without struggling to reach upwards.

He also recommends sitting by the grill for only a few minutes at a time while grilling, and then taking a few minute break away to make sure you doesn’t burn yourself.

Our second video comes from a paraplegic who’s made hundreds of videos. Known as the “Wheelchair Style” guy, he is an L1 paraplegic and is obsessed with doing as much as possible.

In this video, he starts a charcoal grill at a public park for his wife and son. As it usually is with charcoal, it gives him some troubles in the beginning, but soon the grill is fired up and he’s grilling his burgers and bacon like a champ.

RJ Thomas Manufacturing, located in Iowa, is the first of its kind accessible  outdoor products manufacturer. They have made the first ever ADA-compliant charcoal grill for campgrounds and parks. They also accessible make “camp fire rings,” the cooking grates that go over the fire-pit at a campsite. They make them much easier to use; they’re lighter and easier to rotate.

But their accessible grills are quite something. They stand at only 34 inches high (to make them easier to reach) and they sit on pedestals, for the same purpose. It can also be used with only one hand. RJ Thomas Manufacturing also makes accessible benches and trash receptacles.

Summer is almost over SPINALpedia fans. We hope our videos have motivated you. Get out there and grill before you’ll need to don a parka to reach the grill in your backyard. And if you’re feeling really motivated, take a video of you grilling and send it on over. We could use more accessible grilling videos.

Do you have wheelchair grilling tips to share with the world?

– Paraplegic lighting a public grill on a windy day

– A fabulous accessible grill made in Iowa