We’re excited to announce that this Sunday Josh Basile, our Founder and C4-5 quadriplegic along with two other paralyzed men — Colin Buchanan and Robby Beckman — will be embarking on a thrilling sailing adventure from Key West to Cuba and back over seven days. 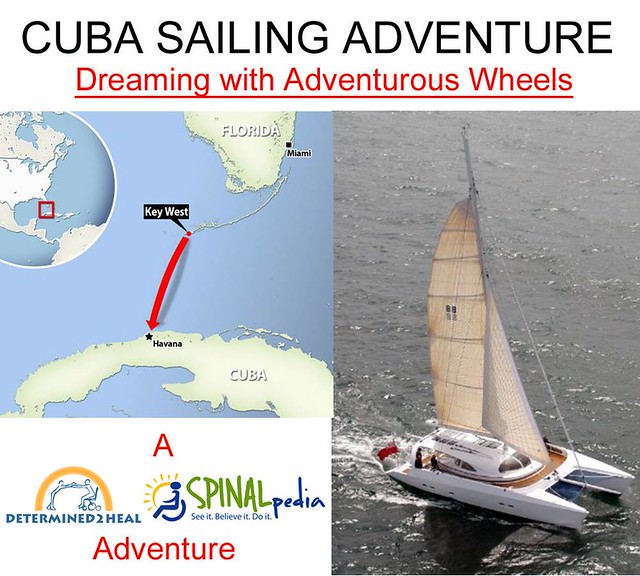 Their adventure will be covered by an ESPN photographer, writer and film crew. Once arriving in Cuba, they will experience life on the island, including staying in a B&B owned by a Cuban paraplegic. Our hope is for this once-in-a-lifetime adventure to empower those with spinal injuries all around the world to wheel after their dreams. With the right attitude and an adventurous spirit most anything is possible.

We believe that in order to truly experience the world one must not be afraid to get their wheels a little dirty and in our situation, a little wet. No matter the surface – land, air or sea – the world can and should be experienced by all. Life is too short not to dream big and with our Cuban adventure, we know we will be able to relay this hopeful message to the masses.

Please revisit this blog over the duration of the voyage for daily blog posts from all crew, photo shares, profiles of the crew and ship and more. 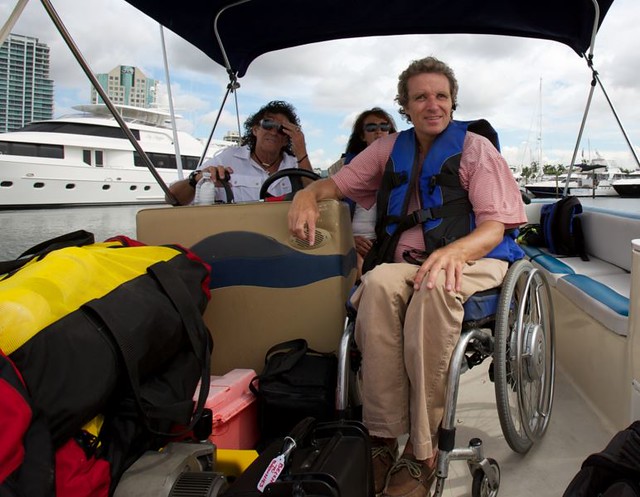 Sailing calls out to many people, and it definitely called to Harry Horgan, founder of one of the most established sailing nonprofits in the country. What started as an adapted sailing program 30 years is now helping both people with disabilities and underprivileged children experience the beauty of the open water. Shake-A-Leg Miami has undoubtedly changed thousands of lives.

Also a husband, brother, as well as a father to a teenage boy who loves sailing just as much as he does, Harry is a seasoned paraplegic who is many faceted, but his compass will always remain pointed towards sailing. His upbringing on the East Coast near the water had a strong influence on him, making sailing one of his top passions.

For many reading this, Harry has been paralyzed longer than you’ve been alive. Injured in 1980 when he was 22 years old (he was in a car accident, flying out the car door). The fact that he survived was a miracle, but Harry was completely lost following his injury. Growing up in Rhode Island, he was very athletic and came from a family of famous golfers. Harry’s love for sports and the water played a special role in his everyday life. That all changed with his injury and during those early years he felt he could no longer take part in what he truly loved.

However, a couple of years after his injury he was introduced to adaptive sports through a program in Colorado, and this experience completely changed his mind-set on what was possible post-injury. He decided to get back to what he loved doing, sailing, and he slowly figured it out.

Harry next found himself driven to help people with disabilities try something he felt so passionately about. So he decided to found Shake-A-Leg in his homestate, an adaptive sailing program. But the foundation didn’t stay in Rhode Island for long. After meeting with Dr. Barth Green with the Miami Project in 1990, Dr. Green persuaded Harry to move his foundation to Miami where they could provide sailing all year round, and he moved his program there in 1990.

For over 26 years, Harry and his foundation have been providing accessible sailing experiences to people with disabilities in the Miami-area, and he has a fleet of over 20 non-powered accessible vessels. Without a doubt, one of the most impressive things he accomplished while running Shake-A-Leg is helping design a completely universally accessible sailboat called the Freedom Independence, one of the first accessible vessels ever created.

Harry is busy as ever as president of Shake-A-Leg Miami. Earlier this year he helped celebrate the 25th anniversary of the Americans with Disabilities Act by inviting President George Bush Sr. on a giant accessible catamaran, known as The Impossible Dream, when it was docked in Rhode Island. He also stays busy in his personal life. Harry is married to his wife Susie and the two have a teenage son, Eli, who loves sailing just as much as they do.

Harry truly is the grandfather of adaptive sailing here in the US. Thanks to Harry thousands of people with spinal cord injuries have experienced sailing for the first time. He has used the sport of sailing to heal and inspire for over 30 years. Adaptive sailing wouldn’t be where it is today without Harry Horgman.

Have you gone sailing with Shake a Leg Miami?

– Ileana meets with Harry Horgan of Shake a Leg Miami