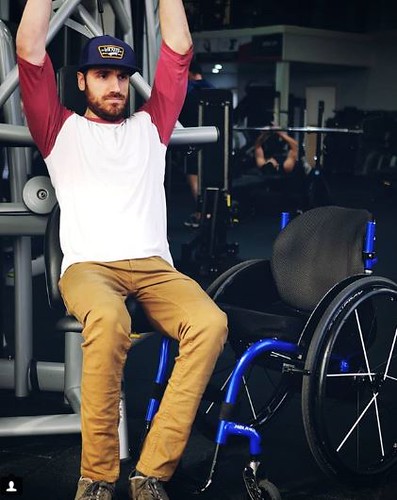 When it comes to adaptive fitness online, you may have heard of Ben Clark. He has one of the most active channels on Youtube catering to wheelchair-users who want to get fit. But his story isn’t just about his fitness channel. A lover, a survivor and yes, living life as a quadriplegic, this 28 year old from Poole, England is committed to living his life on his own terms in spite of his paralyzing injury. Read on to see exactly what we mean.

A swimming accident in 2010 changed Ben’s life forever after he dove into a wave and broke his neck. He is now an incomplete C5-6 quadriplegic but fortunately has decent triceps function. What makes Ben really impressive is that he didn’t need much downtime after his injury. “I’ve always had a positive outlook on life and don’t let things get the better of me. I just saw my injury as a new experience.”

He has lived true to this belief system in the 8 years since his injury, which you can see on his social media channels. On his Instagram account he shares some incredible morsels of wisdom. Here is something he posted while traveling to Australia recently: “Difficult roads often lead to beautiful destinations.” “I choose the hard path and yes it means that life is even harder still but it’s worth it to take me to beautiful places like the one in the photo.” “Adjust your mindset and create the life you want to live.”

One of the biggest influences on Ben’s life is fitness. Before his injury, he was on his way to becoming an Olympic swimmer. After his injury he attempted to be a Paralympic swimmer, but since it wasn’t the same, he decided to move on to something outside of the pool and found a new home – in the gym. It’s been the gym and working out in different ways that has motivated him over the years.

He began a video channel called Adapt To Perform a little over 1 year ago, and the videos he’s been making help people of all abilities get in shape. With 50 videos and counting, he shares every aspect of getting in shape as a wheelchair-user both physically and mentally. One of his most popular videos is his 20 minute HIIT workout showing wheelchair-users how to get a cardio workout while staying in their chair.

He’s also made several videos showing how he uses various pieces of exercise equipment using his Active Hands, which are gloves that help him hold heavy equipment without having good hand strength. He loves to do CrossFit-style ropes, various weight machines and he has even made videos on adaptive yoga with him transferring onto a mat. Ben is a workout/exercise machine and the internet loves him for it.

But his life isn’t just about working out. An avid traveler, Ben visited Australia with his girlfriend Alice earlier this year and last year they traveled to Belgium. He also loves music festivals, doing SCI peer support whenever he can and what’s really cool is his commitment to also making SCI awareness videos.

One is videos is an interview with a friend who is a physical therapist who was injured while skiing, and he shares her story of survival. He’s also made several videos called “Life with Spinal Cord Injury/Two Quadriplegics Talk” where he and a friend talk candidly about life with paralysis. He also shares why his hands are the way they are, as well as helpful information like the benefits of CBD Oil.

We are excited to follow Ben as he continues to share his ever growing wealth of SCI exercise knowledge + more online with the world. The internet has needed someone of his caliber for us SCI folks for a long time.

If you use a wheelchair and want to work out, there are options a plenty for wheelchair exercises. Whether you use free weights, a wheelchair-accessible machine or have devised something a bit more creative, the only thing limiting us in achieving our workout fantasies is our imagination. And Erik Kondo, a T4-5 paraplegic and self-defense expert, has perfected a pull-up from his wheelchair (and it’s not your usual pull-up either).

Everyone hates pull-ups, don’t they? I remember having to do ten in sequence in 5th grade, failing miserably and dropping to my knees with my arms on fire. Despite that sad little memory, I can relate to Erik in wanting to stick to what he could do before his injury (even if it’s not the most pleasant thing in the world). If you can still do it, even if it’s a modified version, go for it all the way. It keeps us mentally healthy!

In the 1:13 minute video, you’ll see this very strong paraplegic do a pull-up with his wheelchair still attached to his body. Crazy cool! I imagine his wheelchair is light, but then again his arms are pretty big. And by the look of his swift repetitions, it looked relatively easy for him to complete them (people who are good at something always make it look easy). Erik keeps his wheelchair attached to his body by using a bungee cord (he must have cut off his seatbelt like me!). Definitely don’t try this at home kids (unless you have a spotter of course). Watch Erik’s video here

And if your arms aren’t as huge as Erik’s, you can still do some do some effective workout routines from your wheelchair. If you check out Nick Solomon’s video (a C5 quad from Washington D.C.), you can view one of the most basic yet easily accessible work-outs from a wheelchair, which has been dubbed: The Theraband workout.

They look like long rubber bands, but these “bands” gives some of the best resistance training you can find for concentrated muscle areas, which is something those with cervical injuries need to do. Nick shows how you can tie them anywhere in the house, even in your car, making it easy to slip in a few wheelchair exercises whenever you have a few minutes. I personally love these things (and have three!). Watch Nick’s video

Have a spinal injury? What are your favorite wheelchair exercises?