Gone are the days of men with paralysis not being able to have their own children biologically. Modern-day medicine has changed the entire landscape of fertility for SCI men. From the use of advanced at-home vibration techniques to invitro-fertilization, there are options available and they work. It’s just a matter of finding the method that works best for a man’s severity of injury.

It also isn’t cheap (loans are available). Thousands of dollars can be spent by couples, and it often is met with success. But this isn’t always so. It’s best to go into the getting-pregnant process with a cautious heart and mind. With that said, here are two awesome SCI infertility success stories. Both men are quadriplegics from the US and neither, as you will discover, had an easy journey in getting their partner pregnant. 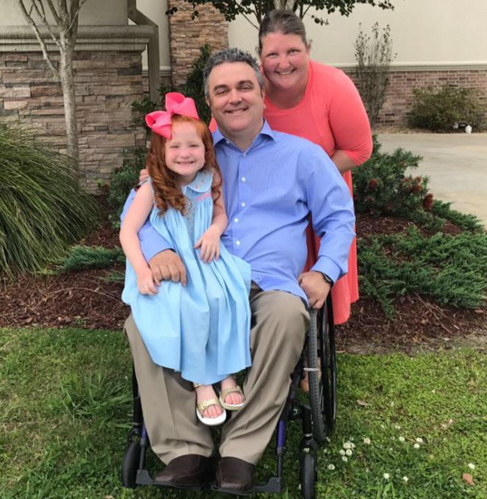 Dan hammer, a C4 quadriplegic living in Lake Charles, Louisiana, never thought he’d have a child of his own. He was paralyzed in 1992 in a diving accident at 19 years old. After his accident, he moved with his family from Chicago to Louisiana. And it was here where he met Kari.

They say good spouses are found at church, and this is exactly where Dan met Kari. Soon after meeting, Dan and Kari were engaged, and were married in 2002. And like any married couple, they felt the desire to have a child. They knew it wasn’t going to be easy, so they began to find a fertility doc with spinal cord injury experience.

Where they live in Louisiana there were no specialists nearby, so they had to travel to Houston, Texas to see a fertility doctor at TIRR Memorial Hermann’s Outpatient Clinic – Dr. John Bertini to be exact. They started the process in 2009 and it wasn’t until 2012 when they finally got pregnant. They first underwent two failed IUI (Intrauterine Inseminations; where doctors help inseminate the woman using the man’s sperm).

Next, they decided to try IFV (in-vitro fertilization). The first time they tried it it failed, but the second time it was successful. Dan and Claire finally got pregnant January 2012 with a little girl. Gianna Claire Hammer was born on August 14, 2012, and as you can see from the photo above, she’s adorable. Congrats to The Hammers! 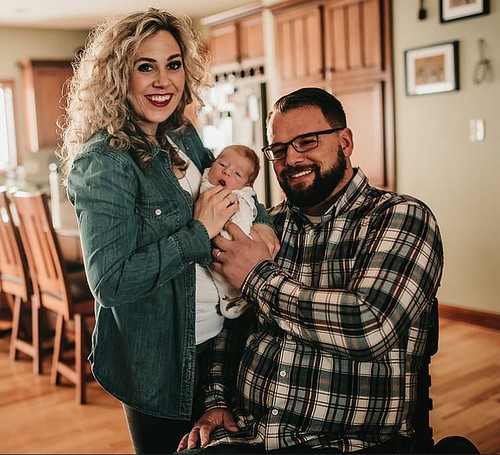 Lauren and Ryan’s story is a bit different. In Minnesota, the couple met in 2005 when Ryan was able-bodied. They had a whirlwind romance and within two years they were engaged. Before their wedding however, Ryan was involved in a snowmobile accident that left him a T5 paraplegic. Their wedding was planned for September 20th, 2008, but after his injury, they decided to postpone their wedding until 2010.

After getting married, they tried to get pregnant. Living near the world renowned Mayo Clinic, Lauren and Ryan decided to see a fertility specialist there. Unfortunately, they did not have success. After two failed IVF attempts, they were scheduled for a third but then the Mayo Clinic canceled because they discovered Lauren had uterine polyps (which makes it difficult to get pregnant).

They went back to the clinic for one more try, but after a third failed attempt they decided to try a new clinic in the Twin Cities – with Dr. Randal Corfman at the Midwest Center for Reproductive Health in Maple Grove, Minnesota. Finally, they found the fertility success they were praying for with Dr. Corfman, and after only one IVF attempt, they got pregnant April 2017. Lauren gave birth to their son, Silas Ryan, in January 2018.

Getting pregnant after a SCI may seem like something that is out of reach, but it not so! If you have a stable financial background, there are medical loans available to help pay for fertility treatments. Check out Prosper Health here for more information. And remember, adoption is another beautiful option that many SCI couples also consider.

This Friday, the long awaited PyeongChang Paralympics are kicking off and it’s going to be a big year. Several of the Winter Paralympic sports have grown since Sochi, which means more athletes are coming to the Games than ever before. Team USA alone is sending 70+ athletes.

From Wheelchair Curling to Nordic Skiing, a short description of each of the 6 official Winter Paralympic sports is below. NBC also plans on doubling its coverage this year, including hundreds of more hours available via streaming coverage. The Paralympics will run 9 days, beginning March 9th and ending March 18th.

Read on and take notes! Knowing the basics of each sport will help you enjoy the coverage, and who knows, it may even inspire you to try a Winter Paralympic sport one day.

– There are 80 medal event competitions scheduled for the PyeongChang games. This is a record number of events for any Winter Paralympics.

– Para Snowboarding has expanded the most of all the Winter Paralympic sports in the last 4 years. In 2014 there were only two medal events and in 2018, ten events are scheduled.

– A record number of athletes are competing this year with 670 Paralympic athletes registered from 48 different countries. This is a 24% increase in athletes from the 2014 Winter Paralympics.

– Even though Russia was banned this year, they’re still able to compete under the neutral Paralympic athlete name.

– The number of women is participating has grown as well, with 44% more females on the athlete roosters.

– Para Ice Hockey is expected to draw the biggest crowds. Team USA and Team Canada are the favorites and the Gold medal game is scheduled March 18th.

Since the Winter Paralympics debuted in 1976, Para Alpine Skiing has been a cornerstone of the Games. There are three competitive classes: Standing, Blind and Sitting, and the equipment ranges from traditional skis and ski poles to sit-skis with outriggers. Blind skiers require a sight companion.

There are five different disciplines as well. They are Downhill, Super G, Giant Slalom, Slalom and Super Combined. At the PyeongChang games, there will be 30 different events for the sport. And it’s fast. “I was averaging about 1 mile every 4 ½ minutes and that is very fast for any skier standing or sitting,” says Jeff Pagels, who competed in the Albertville Games for Team USA in 1992. A US athlete to watch: Andrew Kurka. He has a chance to medal in several of the events.

Para Cross Country Skiing is the ultimate endurance sport on skis and involves skiing across a snow covered field (the skier with the fastest time wins). And just like many of the official sports in the Winter Paralympics, Para Cross Country Skiing has three separate classifications: Sitting, Standing & Visually Impaired. Twenty separate events/competitions are scheduled for the PeyongChang games.

For the Sitting category, a Sprint, a 5k, a 12k, a Mixed Relay and an Open Relay will be held. All sitting skiers must use a Sit-Ski with outriggers. “I hiked when I could walk and this was like hiking for me,” says Candace cable, a 63 year old paraplegic from Los Angeles, California, who’s won the most medals in Para Cross Country Skiing for Team USA. She’s been in nine Paralympics and has won 12 medals in total.

“The friends, teammates, opening and closing ceremonies and mostly it is the people in the country that are the coolest thing about the Games. What a wonderful opportunity to know and enjoy a new country by meeting the people,” she says. And she thinks the US has a good chance to medal this year. “Any of the athletes that were in Sochi could make the podium.”

Cross-country skiing and rifle shooting come together in the sport, Para Biathlon. There are three categories, Sitting, Standing and Visually Impaired as well, and the sport debuted at the Lillehammer Paralympics in 1994. There are 18 Para Biathlon events scheduled for the PyeongChang Games. Men and women also compete separately.

Para Ice Hockey (formerly known as Ice Sledge Hockey) is another sport that debuted at the Winter Paralympics in 1994. Para Ice Hockey was invented in Sweden in the 1960s at a rehabilitation center. At the PyeongChang games, the first match will be South Korea vs. Japan and they’re set to face off March 10th.

The US will play their first game against Sweden March 12th and the semifinals will begin March 15th. A co-ed sport of varying disabilities, Para Ice Hockey is also popular with veterans. Team USA won the Gold in 2014, but Sweden, Norway, Canada, Russia and Japan all have great teams that have a chance at medaling.

Men and women also compete separately, and the Slalom event was added this year. At the 2014 Paralympics, the US men won all of the medals in the sport, however they only grabbed the Silver in Women’s. Renske van Beek, a Para Snowboarder from the Netherlands (she’s paralyzed on the left side of her body), shares her story in this great video.

Wheelchair Curling debuted in 2006 at the Torino Winter Paralympics and is a sport that many with SCI play. One of the biggest differences between Wheelchair Curling and regular Curling is that no sweeping is allowed. This means that the shots/delivery of the stones must be exact as possible. All the players must be wheelchair-users as well, and each team must be comprised of both men and women.

At the PyeongChang games, 12 teams will be competing in Wheelchair Curling. Canada by far is the most winningest Wheelchair Curling team. They’ve won the Gold medal at every Paralympics since it debuted. Norway is also successful and are the 2017 World Champions. The US is currently fifth in the world and have yet to win a medal. This however hasn’t made the experience for US players any less awesome.

“I was in the Paralympics in 2010 and 2014 for Wheelchair Curling,” says Patrick McDonald, a paraplegic from Madison, Wisconsin. “My experiences were amazing. The people, the fans, the volunteers and both Canadian people and Russian people were just amazing to be around. And to represent my country once again as for I am a veteran of the US Army was an honor.”

And remember, the US the coverage of the Paralympics is better than it’s ever been thanks to expanded coverage on NBC, NBC Sports and the Olympics channel. Four years ago at the Winter Paralympics, only 50 hours were aired. However in 2018, 94 hours are scheduled for the airwaves. There will also be an additional 156 hours available for streaming on NBCSports.com and on their app with the same name.

– Visit the official site of the 2018 PyeongChang Paralympics