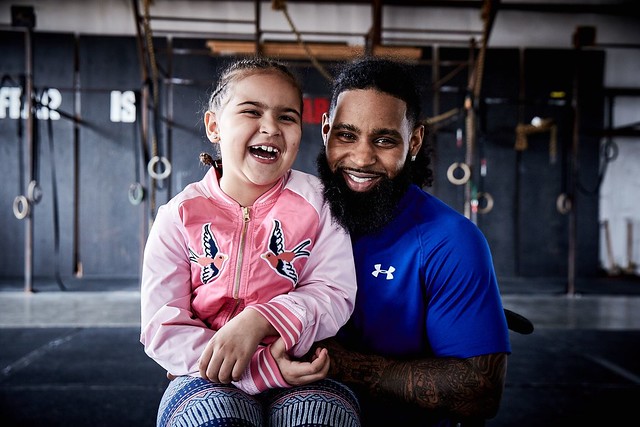 Wesley Hamilton is the very definition of turning a bad situation into one that deserves a Lifetime movie, and his is just getting started. Injured in a gun violence incident 6 years ago, he has found himself since his injury. Not only did he transform his body after his accident, Wesley went on to start a nonprofit that is helping do the same for others with spinal cord injuries.

But that’s just a couple of the amazing things he’s done since becoming paralyzed. Motivating others through speaking, to people who are both disabled and able-bodied, is another one of his passions and it’s beginning to get him noticed across the country. See how his story is unfolding and why Wesley is a positive spirit you‘ll never forget below.

Growing up on the Eastside of Kansas City, Missouri, Wesley was going along living his life when everything changed in 2012. Shot multiple times by someone he didn’t know, he found himself paralyzed at age 24. Wesley was a new single father with sole custody at the time, and at 230 pounds and 5’4, his body was not suited to being in a wheelchair 24/7.

Inevitably, two years after being paralyzed, he developed a serious bed sore that required surgery. Weight was always something he always struggled with; he was never an athlete. Luckily, he had healthcare workers who inspired him to lose weight. Once he learned about protein and taking up a weightlifting regimen, he was off. He even studied to become a dietitian and now eats a Vegan diet.

Wesley in total lost 100 pounds. After losing the weight, he felt so inspired that he wanted to share the power of taking control of your health & weight with others with paralysis. This is why in 2015 he started his nonprofit, The Disabled But Not Really Foundation, to encourage people with SCI to exercise no matter their ability. Wesley is also planning on getting his certification as an adaptive CrossFit trainer.

And he has really taken off physique-wise (he is now a wheelchair weight lifter and competes in muscle competitions), but the way The Disabled But Not Really Foundation has also taken off is what really motivates Wesley. His foundation is helping people with paralysis get in shape and it’s also helping the wider community, like the homeless with their “Hydrate the Homeless” program.

In his downtime, other than being a dad to stay busy, Wesley is a motivational speaker and speaks to high schools, special-ed classes, businesses and to the world through his video channel. He loves to speak on believing in yourself. “I wake up everyday and love myself,” he says. His confidence truly has the ability to instill the same in his audience.

Wesley also speaks about the power of finding courage, overcoming obstacles, never giving up, and one of our favs – creating positive energy. “If you surround yourself with positive energy, great opportunities will come your way,” he says. It has certainly worked for him. Late last Fall (in November, 2017), his story was featured in Men’s Health Magazine.

And his introduction to the world continues. In January, Wesley won $18,000 at WeWork’s Creator Awards Event in NYC. He was honored with their Community Giver Award; a really awesome award. And he also was featured in Ebony Magazine in February 2018 for his foundation.

Currently, Wesley is focused on his foundation’s current challenge, #HelpMeGetFit, where they plan on helping transform the bodies of four people with SCI this year. Such a great idea for the community! They’re currently searching for participants in the Kansas City-area. To contact Wesley, click here.

– Wesley’s personal site: I Am Wesley Hamilton
– The Disabled But Not Really Foundation

– “We are all special. We all have a gift” – a motivational talk from Wesley