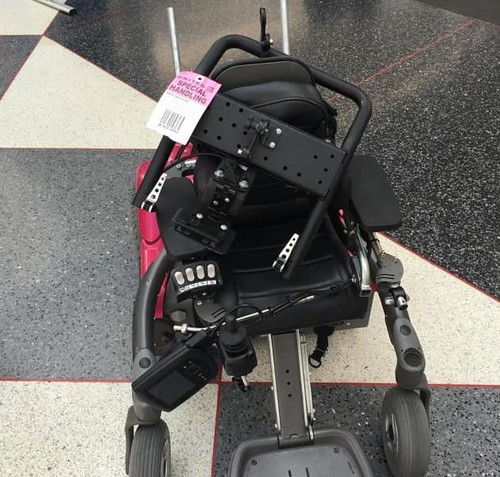 Flying on a commercial flight as a wheelchair user can be frustrating. Nearly every wheelchair user has a story to share, and generally it’s not a pleasant one. There are stories of wheelchairs being lost or destroyed, and nasty accounts of discrimination. Unfortunately, these occurrences are widespread. This month, we are highlighting real stories from real people with SCIs. Our end goal? To continue the conversation needed to push the aviation industry to listen and change its current operating practices.

Two broken power chairs in less than a year. That’s why Kenny Salvini, a C3 quad from Washington, has been all over social media lately. His newest power chair was recently trashed by Alaska Airlines, he claims. “While flying home just a couple weeks ago, Alaska broke my new chair on my trip home from Washington DC,” Kenny says. “Ironically, I had been in the nation’s capital advocating for disability with representatives of United Spinal chapters from all over the country.”

Since Kenny is a high-level quadriplegic and cannot move his arms, his wheelchair is quite expensive, as well as being customized to his body. When his wheelchair is not working, his entire life is in limbo. Last year, his old power-chair was also destroyed while traveling, and Kenny blames aviation giant United Airlines. “They broke my chair so badly,” he says, “that I spent 11 of 14 days on the East Coast without it at all.”

It’s important to note that Kenny and his team of caregivers do everything they can to make sure his chair is transported safely. “We make sure to clearly mark the brake locks and tie-down points,” he says, “remove all crucial pieces including drive controls, drive screen, armrests, footrests, etc. and wrap the chair in foam and cellophane.”

Thankfully, both airlines have been very accommodating, trying to get his equipment fixed/replaced/or repaired quickly. Kenny also doesn’t plan on calling it quits when it comes to flying. “You can’t let fear hold you back from the desire to travel and ‘do life,’ he says. “Even though I’ve had a couple of horrific experiences, the majority of my flights have gone relatively well with only minor pieces of equipment being broken.” Kenny’s advice? “Take every precaution you can prior to flights including plenty of before and after pictures.”

He also says it’s important to become your own best advocate. “Join the fight for equality in air travel for those of us with disabilities,” he says. “You can contact your House and Senate representatives and demand they pass the FAA Reauthorization Act and the Air Carrier Access Amendments Act to push the industry into finally becoming accessible. You can support organizations like All Wheels Up, a nonprofit focused on seeing those changes become a reality.”

“Last November, my husband’s power chair sip and puff did not make it on the plane. They put it on the plane next to us and it went to Oakland as we went to Denver. When we landed we were informed and had to be so creative so make things work because of the severity of his injury. We did not receive the chair until the next day and the first day of vacation was totally lost,” Ashley describes.

“If only they could find a way that people could stay in their chair during flight… that is all around the perfect answer!”

“A few years ago I was flying Delta from Vegas and had a stop-over in Atlanta. At the gate, I was asked to follow an attendant. When I asked why and where we were going, we didn’t get an answer. We were taken down in an elevator to where the garage is kept and were escorted out onto the tarmac with roaring jets greeting us,” Patricia says.

“I asked them to ‘Please let me do it on my own,’ but they didn’t listen. I told the attendants that pulling me like that was dangerous as I could have fallen. Their response was, ‘We know what we were doing and were only trying to assist. Clearly, neither was the case! And on another trip from Charlottetown to Toronto, I was unable to walk up the stairs to the plane. They used a forklift to load me up into the plane like a piece of cargo!”

“As a wheelchair user, I’m used to delays, being the last one off, etc., but I definitely want to see things change. One area that has always distressed me is being screened by security/TSA. Recently, while traveling to Utah to see my family, I know for a fact that the person who did the screening did not do it appropriately. While I’m sure it was unintentional, having my private areas touched (not just brushed either) is extremely uncomfortable and embarrassing. I feel like those at TSA do not have any clue what it’s like to be in a wheelchair,” says Kristie.

“That was just the first part of the day. When I got to the gate, the two employees who were there to transfer me into the aisle chair nearly dropped me during the transfer. It was as if they had no training at all! Then when I arrived in Seattle for my layover, I noticed that my brakes were all messed up and part of my backrest as well (luckily they were easy to fix).

“In the past I‘ve also missed connecting flights because they took too long getting me off the plane. Once I even got stuck on one of those stair lift machines in Biloxi when the electricity went out. Also, I feel like I have to practically dehydrate myself because I can’t really use the onboard lavatories. I wish they were obligated to make them bigger,” she adds.

“My name is Tony. I’m a T12/l1 complete paraplegic. I just recently moved to Ohio from Louisiana and this was my first and probably last time flying, which means I’ll be driving from the Great Lakes to the Gulf Coast to visit family. This not only causes an unnecessary health risk, but additionally an inconvenience. I’m a little larger than average, so this automatically makes transferring into that death trap aisle chair on the plane a pain in the butt,” laments Tony.

“On the first leg of the flight from New Orleans to Atlanta, the transfer into the plane went as smooth as you can get. By that, I mean the arms on the chairs only rammed into my kidney twice and I was able to transfer over the arm and into the seat keeping my pants on. When we got to Atlanta, it took so long to deplane the passengers that the pilot called and asked traffic control to hold the connection flight. I was thankful since the elderly, non-English speaking man who was sent to help me deplane alone was late.

“Trying to get me off the plane was such a nightmare that the pilot had to help. The elderly gentleman was nice enough, but he was telling me to jump out of the seat and get into the aisle chair. Every time I told him that I can’t move he would get mad. When the captain came out he explained to me that as a former combat pilot, he was surprised at my patience.

“When we arrived in Ohio, I was on the way out and an arm from a chair grabbed my jeans and rather than try and figure out the holdup, he just kept pushing until my pants came down. The flight attendant tried to help me put them back on, but under the mass of seat belts it proved impossible.”

We hope to see change come sooner than later to the aviation industry! What changes do you think would improve air travel for the SCI community? Better training? Bigger fines? Share your comments below.

Do you have a flight experience to share? Send your story to spinalpedia@gmail.com