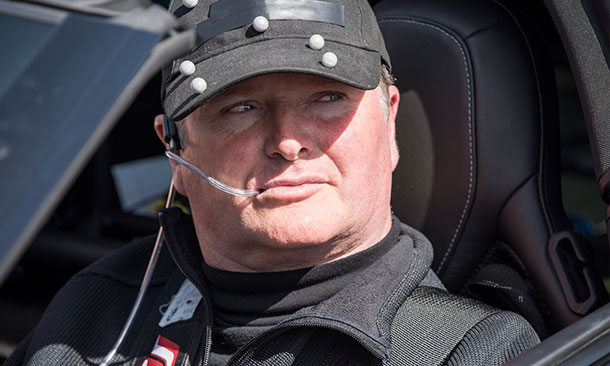 Sam in his Chevrolet Corvette, driving using a straw and camera points on his hat.

He may have lived with C3-4 quadriplegia for 17 years, but that doesn’t define who he is. Born into a family with racing in its blood, he started racing competitively when he was just five, and Sam’s injury has only changed the way he enjoys his life’s passion. Read on to see the ingenious ways this husband, father and businessman has re-purposed one of the things he loves most.

Born in Lincoln, Nebraska and growing up in southern California, Sam was raised by a father who loved to race. He grew up working on race cars and his father competed in drag races, super modifieds and off-road until he was 10 years old. Even though he stopped racing after his father was injured (one side of his body became paralyzed), Sam’s fierce love for the sport never wavered. After graduating from Pepperdine University with an MBA in International Finance, he found himself back in the racing world. Working his way up through the ranks, he qualified for his first Indycar competition in 1997, and he won his first IndyCar race two years later in his adopted hometown of Las Vegas in 1999, ”My peak,” he likes to say.

Three months after winning his first IndyCar race in Orlando while practicing at the Walt Disney world speedway (in the off-season), he hit the wall and crushed his C3-4 vertebrae. His parents, wife Sheila and their two children, Spencer and Savannah (who were very young at the time), rallied to his side. The four remain a tight family unit until this day. Living in Henderson, Nevada, Sam may not be able to move his arms, but he is a hands-on father in every way, from teaching his kids to drive to being someone they look up to constantly. Watch an interview with Sam and his son

After his injury, Sam knew he needed to keep busy, which is why within a year of his injury he founded a racing team to compete in Indy Lights and IndyCar in 2001. In 2013 he teamed up with Ric Peterson. They’ve accumulated over 70 wins, 70 pole positions and seven championship wins. 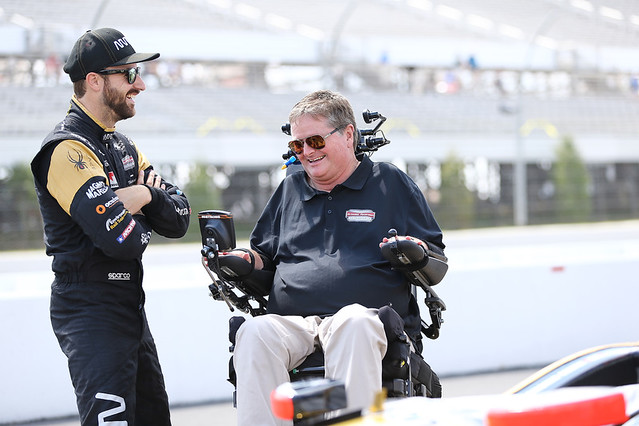 After running his racing team for 13 years, Sam was contacted by Arrow Electronics, a company based in Colorado, who wanted to develop a semi-autonomous car specifically around Sam’s abilities. Once he verified it was safe, Sam was all in. Within months, they worked together to create an amazing piece of technology – a complete mouth and head control system that allows Sam to drive a Corvette. 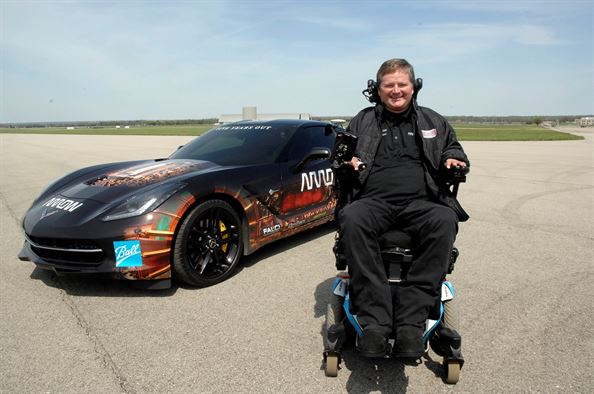 Sam in front of his 400+ HP Corvette, which he drives with his mouth.

In 2014, Sam first tested the car at a raceway in Indianapolis. The feeling of being behind the wheel again under his own power was unlike anything he’s felt since before his injury he says, and we can believe it. To drive he wears a pair special sunglasses that are tracked by six cameras in the vehicle. By turning his head left or right, Sam is able to steer the car. He jokes he needed to retrain his mind (and an extension, his head) to not look around while driving, as to not steer himself off the road.

To accelerate, Sam blows into a straw. To brake, he sucks in on the straw. He also uses voice commands to control other functions of the car. The entire setup is awesome. Sam says he never thought he’d be able to drive again, but now “just driving again” is going much further than that.

After he drove the first time post-injury on April 7, 2014, Sam wanted take the car out into the world as much as possible. He demo’d it at Long Beach Grand Prix circuit, and he impressed everyone at the Indy 500 last year when he drove a new version of the car, taking it up to 152 mph in a demonstration before the race.

Sam still wanted more. Last June, he participated in Pikes Peak Hill Climb in Colorado, a 13 mile hill climb with over 150 turns which he completed in just 15 minutes. Not bad!

And Sam’s most recent driving feat? Amazingly the team at Arrow worked out an agreement with the Nevada DMV to create a special drivers license so he could drive on the streets, and off the racetrack. Last September, Sam became the first person in the United States to receive a special drivers license for driving a semi-autonomous vehicle! He is however required to have a co-driver with him whenever he drives.

Driving and running his racing team however are just some of his passions. His other life’s passion is raising money for spinal cord injury research, which his foundation, Conquer Paralysis Now, with the overall goal of advancing medical treatments and technologies towards a cure. Sam believes that if his foundation could raise $100 million that he could cure spinal cord injuries in just 10 years.

Whether it’s driving fast or racing towards a cure, Sam is a man in motion. He won’t be stopped, nor slowed down, no matter what he sets his sights on, and we love him for it.

Would you drive a semi-autonomous car?

– ABC story they aired before the Indy 500: Sam’s Story

– The tech allowing a paralyzed man to drive – BBC Click