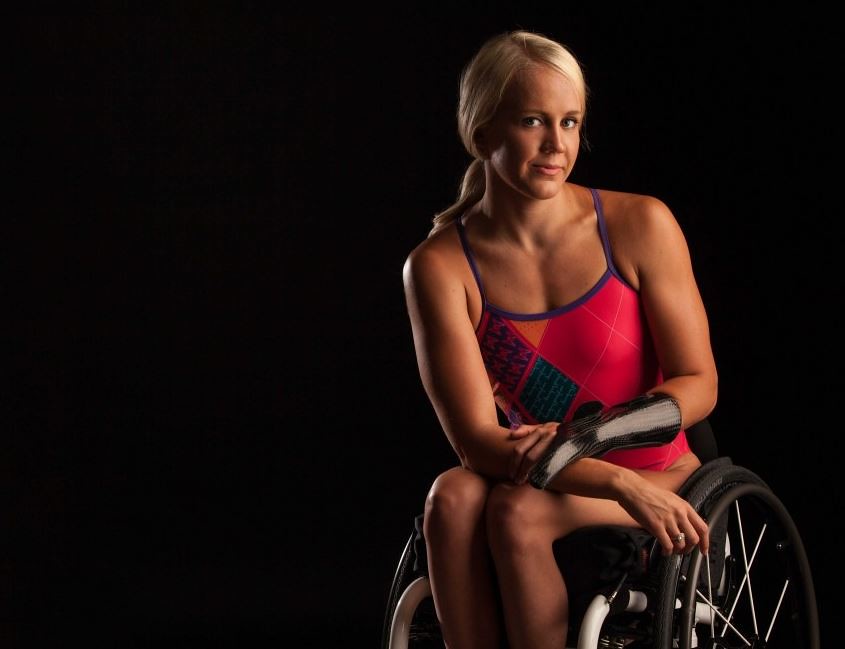 “We all have some kind of disability,” is the mantra of Mallory Weggemann, a U.S. Paralympic gold medalist swimmer from Minnesota. Paralyzed when she was 18 years old, she has come a long way since her early days of feeling sorry for herself. A lifelong swimmer, swimming is what saved Mallory post-paralysis.

And her journey over the last 8 years has been astounding. From breaking Paralympic swimming records to winning sports achievement awards left and right, Mallory has a drive for success that’s unstoppable. Read on to learn more about this fierce swimmer and how she plans on killing it in Rio next month.

Mallory, now 27 years old, grew up in love with swimming. She came from a swim family and started swimming at the age of 7. Both of her sisters also were competitive swimmers, making her parents well known faces at the pool. Mallory too was the captain of her high school swim team, and she began college as a freshman, planning on swimming in college.

But everything changed in 2008 when she was 18 years old. Suffering from shingles, her doctor recommended she get epidural injections to treat the pain. Her third injection however had a devastating effect and paralyzed her at the T10 level; a huge blow to her love of swimming…or so she thought. Three months after her injury, her sister begged her to attend a Paralympic swimming event with her to observe, and that day changed Mallory’s life forever.

Up until that point, Mallory had no idea a paraplegic could swim, but once she was on the swim deck that day talking to the coaches and swimmers knowing all of it was possible, she knew she wanted to return to swimming. For many who experience a spinal cord injury, returning to a sport you loved pre-injury can be too difficult, but Mallory didn’t let that stop her.

Mallory soon returned to the pool and she quickly realized she could still swim, and incredibly fast. Soon she had sponsors, a coach and she was looking towards the future. She won her first gold medals in 2009 at the IPC Swimming Short Course World Championships and by 2010 she was Swimming World Magazine’s “Female Disabled Swimmer of the Year.” And in 2011, Mallory won an ESPY award for the “Best Female Disabled Athlete of the Year.”

Mallory however had bigger dreams. She wanted to compete in the 2012 London Paralympics, which she did. At the age of 23 she won gold in the 50m Freestyle, breaking the record time. She also won the bronze medal in the 4x100m 34 Point Medley Relay at the 2012 Paralympics.

Post 2012, Mallory’s life was moving along at a great pace – she felt strong and she had 2 Paralympic medals under her belt, but in 2014 Mallory suffered a serious injury to her left arm when a shower bench in a shower broke underneath her at a hotel. She now has a permanent nerve condition and lost dexterity in two fingers. Daily activities were difficult right after, and swimming competitively was out of the question. Her injury was so severe she was even contemplated retirement.

But she wasn’t ready to retire. Instead, Mallory pushed herself slowly, along with the help of her coach, and soon her ability to swim competitively returned. And even better, the hope that she could possibly make the U.S. Paralympic team for the 2016 Rio Paralympics was a real possibility.

Training harder than she ever has before, Mallory made the U.S. Paralympic Swimming team just last July; a feat that likely meant more to her then making it on the 2012 Paralympic team. Looking forward to the Rio next month, Mallory is the pure definition of a comeback queen.

From public speaking and swimming to planning her wedding (to her longtime boyfriend) and even reciting the Pledge of Allegiance at the Democratic National Convention last month, Mallory is on fire and we can’t wait to see how she does in Rio.

Which sports motivated you post-injury?

– Read about Mallory’s “Road to Rio” in her own words