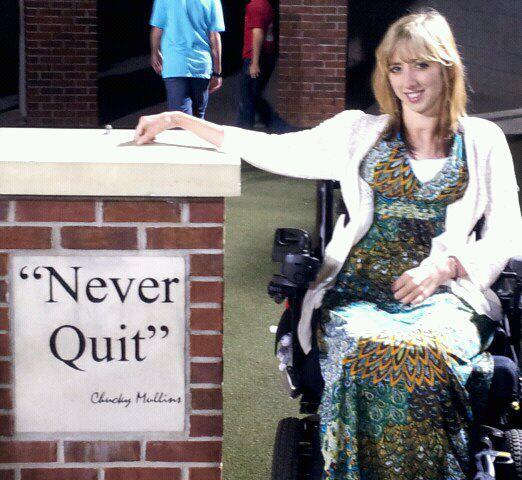 A spitfire with a paint brush, Katy Blake is a woman you’ll never forget. Like so many before her, her life was transformed by a miscalculated dive and now at 29, she is “power mode” in regards to forging ahead with her new life, and six years post-injury she’s more determined than ever to make every day count.

What we especially love about Katy is what she’s done to bring attention to the need for more rehab for people living with spinal cord injuries. Hailing from Mississippi, a state lacking in funding for people with SCI, she had just a few weeks of therapy, but she successfully used social media to get the additional therapy she needs.

To find out exactly how she did it, and how she reunited with an old high school flame along the way, read her fantastic story below.

It was a canoe trip in June 2010, and Katy was having the time of her life. She had just moved to New Orleans, and to cool off, she dove into the creek. Instantly she knew it wasn’t deep enough. She had broken her neck and couldn’t move anything from her shoulders down. After her friends pulled her out, Katy was flown to a nearby hospital and was diagnosed a C5 incomplete quadriplegic.

After a very hairy three months in the hospital that required an expensive stay in ICU because of pneumonia, and then she developed a pressure sore on top of that, Katy’s first year of living with paralysis was definitely no walk in the park. She was 23 and depressed the first year post-injury, like so many of find ourselves. Those dreadful early years are the worst.

And then to make matters even worse, she and her family had to worry about health care. Although she was enrolled in a health insurance program right after her injury, Mississippi Medicaid wasn’t going to pay for all of the rehabilitation Katy needed. So she turned to the Internet and began her Facebook page – Rehab for Katy – to fundraise, and boy was she successful.

She raised enough money to go the renowned Shepherd Rehabilitation Center in nearby Atlanta, Georgia and she gained thousands of followers cheering her on. Thanks to Shepherd, Katy found out about tendon transfer surgeries as well; a surgery that helps people with C5-6 injuries regain more function in their arms by moving specific muscle systems in replace of others. She got the surgery last year and now has much more ability in her left hand.

She also decided to dabble in world of art, trying out painting relatively quickly after her injury. Her brightly colored portraits on everything from owls to crabs to seashells to her favorite NFL player Drew Brees, are happy paintings, and they have brought her acclaim, adventures at art fairs, a great outlet for mental health, not to mention funds for her on-going rehab. View her artwork on her official site here – Art on Wheels

Over the last six years, Katy has shared her life with the world via social media, showing people everywhere, but especially in her hometown (where disabilities aren’t very prevalent), that life does go on after a spinal cord injury even if you’re still waiting for the cure. Katy’s story is one of many, but her spirit stands out.

And the Internet fell in love with her even more when she and her high school sweetheart, Mondo, reconnected and rekindled their relationship over 10 years since they were together. With Katy’s sunny personality, it’s hard to imagine anything like a wheelchair having the power to make quell old flames. Go Katy, we’re cheering for you too from every corner.

What do you think of Katy’s success in raising rehab funds online?

– Applying Makeup as a C5 Quad

– Applying Makeup as a C5 Quad

– Walking on the Lokomat at Shepherd